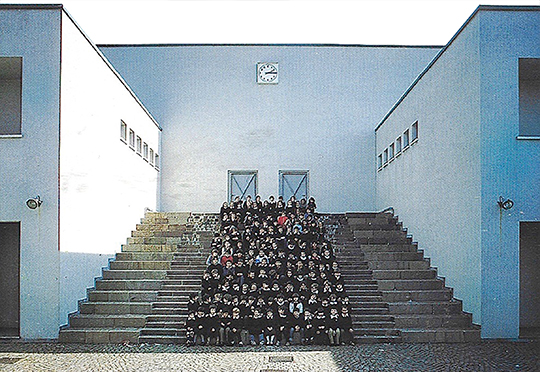 The exponential growth that is currently undergoing in Australia's major cities has brought significant changes in urban programs and activities.

As the key buildings in the urban fabric of most communities, schools are experiencing significant changes, in particular as the population is growing at speed, and the land available is scarce and expensive.

As a way to deal with this new condition, the Australian Government has started to “think about education vertically."

This translates into several vertical schools currently being built, all in the most populated areas of our major cities.

This situation presents us with an opportunity to explore new forms of spatial organisation, and propose different formal and spatial configurations that might eventuate into a new type of building.

Students will have the opportunity to formulate their own conceptualization of what a contemporary vertical school might be, and in particular challenging the boundaries between interior and exterior space.

The project’s site will be located in Prahran, at the corner between Malvern Road and Little Chapel St.

Students will be presented with the opportunity of exploring the potential relationships that might exist between architecture and landscape architecture; and between interior and exterior space while reflecting on a site-oriented project that acknowledges the importance of redefining existing programs through strategies that seek to emphasize the importance of public buildings in the city.

The design process will be undertaken through three main methods that complement each other, which include observation, case study methodology, and design exploration. This project has to be represented employing a wide range of different tools of architectural communication, i.e. physical and digital models, drawings, and images, etc.

Isabel Lasala is one of the Directors of Lasala & Lasala Architects, an award-winning practice with more than fifteen years of experience. Isabel holds a Bachelor of Architecture from Universidad Central de Venezuela, a Master of Architecture from ETSAB/Universitat Politècnica de Catalunya, and an MPhil in Landscape Architecture from University of New South Wales. Her practice-based research investigates new possibilities emerged at the intersection of architecture and landscape architecture. In 2014, Ediciones FAU/UCV published her book Creating Places: Exalting and Overcoming the Architectural Object in the Work of Pablo Lasala. Before settling in Australia in 2009, Isabel was a Senior Lecturer at the Faculty of Architecture and Urbanism of UCV. Here, she has taught design studios at Melbourne University, Monash University, RMIT, UNSW, and University of Technology Sydney.