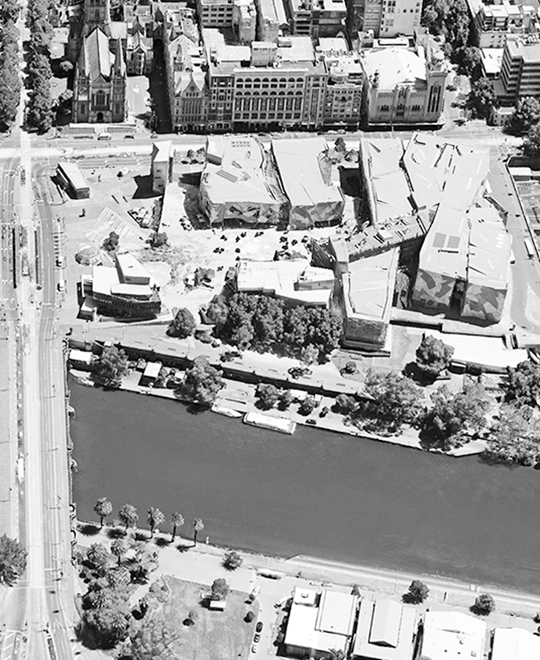 The area occupied by Federation Square today has a long history. It is a site that has hosted the Melbourne Morgue, the Princes Bridge Railway Station, the Princes Gate Towers and, importantly, prior European settlement, it was the area where the Kulin confederacy of Aboriginal peoples – the Wathaurung, the Bunurong and the Woiworung peoples – dwelled and gathered for tens of thousands of years.

The changes that have occurred on this site evidence its importance, not only geographically, but also in relation to the city. In 1996, the decision to demolish the Princess Gate Towers building was taken to “change the face of Melbourne forever,” and make it “truly a riverside city,” by words of former Liberal Premier, Jeff Kennett.

Federation Square is one of the few areas in Melbourne where the CBD connects with the Yarra River, a connection that was made possible thanks to the construction of a deck over the rail tracks. This massive piece of engineering gave the opportunity to create an open and fluid relationship with the CBD, however, at the time of its construction, the section of the project connecting with the river was cut off.

This studio asks: What design strategies can be implemented to activate the relationship between  Federation square and the river?

In light of these circumstances and in order to answer this question, this studio offers students the opportunity to work along with Federation Square Management and explore the possibilities for connection, reactivation, and consolidation of the vital spaces that exist between Federation Square and the Yarra River.

The intention is to create stronger formal and spatial relationships between the CBD and the Yarra River through an extension of Federation Square, and create unexpected and inspiring public spaces that, at the same time, can ‘weave’ the urban and the River landscapes.

The design process will be undertaken through three methods that complement each other: observation of the site and its surroundings; case study methodology; and design exploration. The laboratory experimentation will be fundamental in this studio, in which a series of generative techniques and tools will be developed to achieve the methods described before.

Isabel Lasala is one of the Directors of Lasala & Lasala Architects, an award-winning practice with more than fifteen years of experience. Isabel holds a Bachelor of Architecture from Universidad Central de Venezuela (UCV), a Master of Architecture from ETSAB/Universitat Politècnica de Catalunya, an MPhil in Landscape Architecture from University of New South Wales, and is currently a PhD candidate at RMIT University. Her practice-based research investigates new possibilities emerged at the intersection of architecture and landscape architecture. In 2014, FAU/UCV Editions published her book Creating Places: Exalting and Overcoming the Architectural Object in the Work of Pablo Lasala. Before settling in Australia in 2009, Isabel was a Senior Lecturer at the Faculty of Architecture and Urbanism at UCV. In Australia, Isabel has gathered a wealth of experience teaching design studios at Melbourne University, Monash University, RMIT University, UNSW, and University of Technology Sydney.