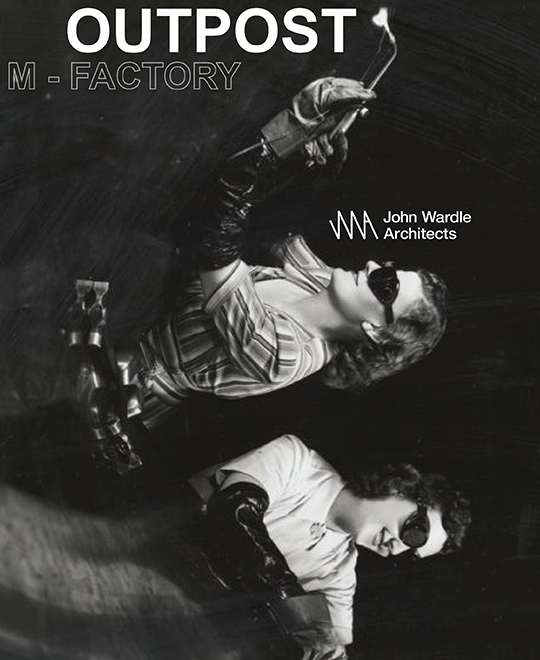 Outpost is a series of teaching studios run by John Wardle Architects. We understand Outposts as speculative by nature and represent a desire to evolve cultural values and experiment with emerging forms of knowledge. They can be defined by a geographical location, a philosophical position, or a new medium of creative expression. By operating at a distance, an Outpost is a site to experiment with emerging ideas, identities, and modes of representation.

Outpost 04 considers the factory as a site for architectural inquiry. As we emerge from the pandemic the priorities and pathways for the future of local manufacturing are being redrawn. The local industries of the future will be driven by significant technological innovation – research and development of sustainable manufacturing and advance material and frontier technologies are key to a healthier local industry ecosystem.

The studio will explore a hybrid typology, both a proving ground for new, small-scale industries and a hub for innovation, research, and learning. Students will identify and research a material technology and production process that promotes circular economic principles, sustainable operations and outputs, and is suited to local manufacture. This research will be presented as a return brief – a proposition for a factory of the future.

Before proposing a new model for local industries, this studio begins by posing new questions. This approach promotes a habit of mind where questioning is celebrated as a central act of the design and research process. The studio’s emphasis on sustained questioning will be enacted through a series of focused design tasks, site visits, readings and group discussions that will provide the conceptual tools to develop a Return Brief that challenges the received functional one.

A Return Brief is a core requirement of the studio and will be referred to as a constant guide for the development of each project. Evidence of questioning and critique, a Return Brief suggests that a received set of ideas required reconsideration, renovation, or even rejection. This studio frames the process of questioning a brief as fundamental to being an architect, and optimistically believes that the brief shouldn’t be passively received - but actively shaped.

TOM PROCTOR works for John Wardle Architects as a designer on projects ranging from residential, educational and commercial development to large scale master planning proposals. During previous employment he has worked on infrastructure and civic projects such as the Melbourne Metro, Perth Stadium, and the WA Museum. Tom has a strong background in mathematics and parametric modelling which has led to collaborations with a number of industry leaders including augmented reality software firm Fologram and engineer James-Murray Parkes of Brookfield Scientific Solutions Group (BSSG).

STEPHANIE PAHNIS is practicing architecture at John Wardle Architects, with architectural experience working across civic, health, residential and educational sectors. Her design role extends to dedicated research, through being a key participant in the evolving sustainability and biodiversity research project at JWA. She has academic experience as a sessional tutor at RMIT University in both the Master and Bachelor of Architecture programs. Her research and design focus has evolved from co-founding, editing and the ongoing procurement of the youth-led, independent architecture journal named Caliper in 2017.