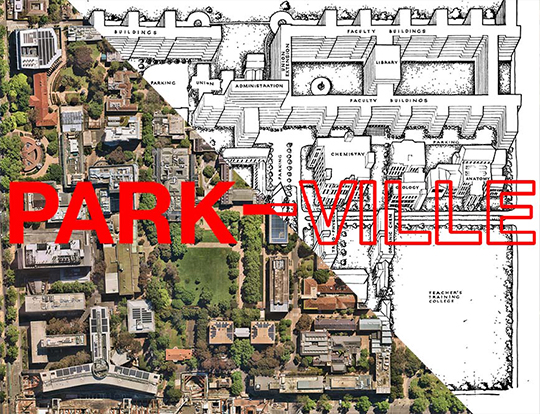 The function of the Australian University is continuing to evolve from a place exclusively for learning and research to one of industry engagement, co-habitation and commercialisation with a much more porous and integrated relationship with community and industry as well as global outlook. How might the University of Melbourne’s Parkville Campus evolve in the years to 2050 and beyond, responding to climate change and new emerging patterns of pedagogy?

The reformulation of the ground plane and building façade will become the main focus of the next epoch for the campus urban fabric. Parts of the existing urban morphology will be stripped down and recast to suit current pedagogical and user needs.

This studio will examine the dynamic and hierarchy of structure and void, interface of façade and landscape, and the role of heritage when determining change in an ‘established’ urban environment. The studio’s design principles concern grounding the varying scales and component layers of a single architectural project in the collective knowledge of the city.

The studio’s principles are formed around re-using and adapting existing post-World War II building fabric on the Parkville Campus, markers of modernism’s translated continuum of the traditional quadrangle urban pattern, to meet the needs of a contemporary campus its users and overarching environmental concerns.

The issues, themes, and conversations to be explored in this studio include:

Students will develop an integrated understanding of the nature and ‘layers’ of the contemporary campus, ways of inhabiting the campus, campus heritage and identity, and the relationship to the city's collective history. By exploring and testing methodologies and approaches to complex urban mapping, collaborative research and ‘ways of seeing’, students will implement planning and design decisions through strategic and systematic thinking.

This studio will employ an on-the-ground research methodology using the campus as a case study. Students will develop and maintain a reflective folio throughout the semester that effectively communicates their urban and architectural approach. The studio outcome will be the delivery of innovative and well-grounded architectural proposals underpinned by a deep understanding and response to the relationship between city, campus and context.

The final format of projects is anticipated in the form of short films, graphic panels and folio publications, with the opportunity to explore other visual, digital, and interpersonal modes of communication.

Currently working in the University’s Corporate Finance Property and Sustainability (CFPS) group since early 2021. Over 25 years of industry experience in the master planning and design of large-scale projects while at LAB Architecture Studio and principal at NH Architecture including:

Co-founder of the collaborative research and design vehicle M@STUDIO, which was awarded the National Gallery of Victoria Architecture Commission for 2016 titled Haven’t you always wanted…?

Lectured in design at the Melbourne School of Design at the University of Melbourne. Ongoing teaching at RMIT University in the Masters of Architecture program since 1994 through design research studios. The Suburban Realism: Scale Ability exhibit at the 2021 Melbourne Design Week was an extension of this series

Zack has worked on the feasibility-to-delivery of complex capital projects in the higher education sector for the past five years, including the first Precinct-scale development at the Parkville Campus, with a current focus on the development of strategic property initiatives at the University of Melbourne.

With a background in architectural design, Zack’s interests lie in the unique evolution of the University’s citified ecosystem, campus heritage and adaptive reuse, as well as the role of strategic and legislative frameworks in driving capital projects and the intersection between planning and user-centred agendas.

Strategy (to be provided):

UoM Campus Masterplans (to be provided):