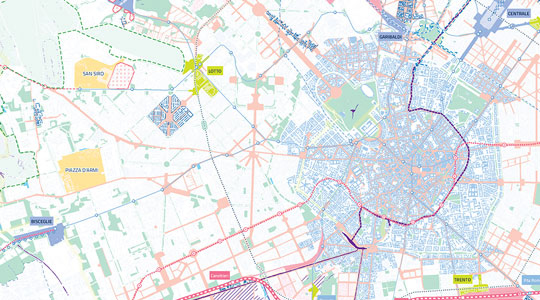 The studio will utilize the Milan Navigli competition as occasion to reflect on how cities can be revitalized and future proofed by reopening historic urban watercourses and reactivating adjacent urban spaces.
As described by the competition organisers Bee Breeders: “Milan has a long history of navigable canals that formed a fundamental part of the city’s economy and the growth of the whole region, providing a direct connection between the northern lakes down to the sea. Within Milan, the Navigli canal transported both people and goods throughout the city, but at the start of the 20th century the city’s inner canals were covered to add to the city’s road system. The Navigli canals now run underneath the streets but have the potential to be rediscovered and bring back Milan’s “water city charm”.
For the Milan Navigli Canal Challenge, participants are tasked with conceptualising the Milan of the future and envisioning a symbiotic relationship between the city and the Navigli canal. Projects should focus on​​environmentally - friendly design, mobility, and the relationships between water and urban spaces. The Milan Navigli Canal Challenge is being run in collaboration with Riaprire i Navigli Association – "Reopen the Navigli Association'' – and Primitivo studio Milan, who are proposing a complete renovation of the existing canal. Their goal is to create a new way for the city to operate, with competition entries to play a big part in swaying public opinion on the subject.”

We will use the setup of the competition to critically reflect on how the re-opened canals can operate as a catalyst framework of urban regeneration of a historic European city.
How can ‘hard’ urban spaces be transformed into innovative new civic spaces that respond to climate and heat challenges, while also creating more attractive and interactive urban landscapes?

Città d’Acqua aims at critically repositioning the Navigli canal system as the crucial lifeline for Milan’s future. The competition studio challenges the current status quo in urban planning by critically reflecting Milan’s eventful history. The studio will develop an aspirational future vision for the city’s historic core through the lens of the Navigli canal system. The vision will be tested through speculative projects that integrate the natural world and urban form holistically, aiming at visualizing a truly new urban ecology.

The studio will operate at two scales, namely the metropolitan scale to understand dependencies between the canal system and urban development, issues, phenomena and to articulate an overarching vision for the reintegration of the historic canal system within the urban. The studio’s overall vision will inform the master plan. At a site-specific scale, the studio will test the vision through architectural propositions in distinct sites, where students working in pairs will develop their own theme and program brief based on their research and analytical findings.

The first half of the semester is aimed at building up research into project themes and program briefs as well as a set of design techniques e.g., hybrid and operative mappings, to formulate a clear understanding about the site, the system, and the conceptual framework of the studio and develop preliminary propositions

During the second half, students will develop their projects focusing on the consolidation of their ideas as well as the careful drawing and modelling of these speculations.
Rigorous and bold experiments will be rewarded and need to be communicated comprehensively to form successful competition entries: Submission of 2x A2 boards.

The ambition of the studio is to design a series of provocative projects exploring the idea
on how to integrate ‘lost’ canal infrastructure within the existing urban fabric, while complementing existing public spaces and routes into a continuous urban network. This network of climate-responsive interventions will integrate architectural, landscaped, and urbanistic elements to form a thriving urban socio-ecology. Conceived to maximize natural ventilation, evaporative cooling and shading, the competition projects will showcase a diversity of civic programs responding to the adjacent neighborhood needs.

Markus Jung is a Melbourne-based, German architect and urbanist. He grew up in Italy where his passions for cities and human interactions were nurtured. In 2005, he co-founded the architecture and urban design agency XPACE architecture + urban designin Zurich. XPACE investigates strategies of metropolitan transformation, incorporating resources and the existing built and social fabrics as drivers for sustainable city-making. Markus’ co-authored book Building Mixity! was shortlisted for the Australian Urban Design Awards in 2019, while his water urbanism research in Kunshan China, received the 2017 Award of Excellence in Innovation by the Australian government. His current design-research Melbourne Cool Lines! was exhibited at CITYX Venice, Italian Virtual Pavilion, at the 17th Venice Architecture Biennale 2021. Markus has held permanent academic positions at ETH Zurich, Monash University and was a visiting professor at Southwest Jiaotong University Chengdu.