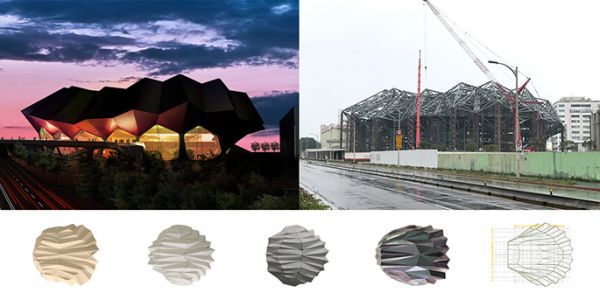 Jesse Reiser and Nanako Umemoto: ‘Projects and their Consequences'

The work of Reiser + Umemoto (RUR Architecture DPC) spans over 30 years of practice at the forefront of architectural innovation, comprising rigorous research and experimentation across both built and unrealized projects. The firm’s winning proposals for both the Taipei Pop Music Center and the Kaohsiung Port Terminal are now under construction in Taiwan, while O-14, a 22-story exoskeletal office tower in Dubai, was completed in 2012 and has received numerous international honors.

The lecture is framed around one of the central concepts of their forthcoming monograph, Projects and Their Consequences: A consequential project both connects to a generationally shared set of social, political, and cultural desires, which exceeds authorship, and at the same time develops within the practice as a sustained set of material, organizational and formal interests that connect across time, at disparate scales, programs and sites, and with a particular authorial stamp.

Jesse Reiser received his Bachelor of Architecture degree from the Cooper Union in New York and completed his Masters of Architecture at the Cranbrook Academy of Art, and in 1985, was appointed as a fellow of the American Academy in Rome.

Architect and Landscape Architect Nanako Umemoto graduated from Cooper Union following her studies at the School of Urban Design at the Osaka University of Art. In addition to teaching together at Columbia University, they have individually taught and lectured at various educational and cultural institutions throughout the United States, Europe and Asia, and their work has been widely published and exhibited for over 20 years.

The firm was awarded the Chrysler Award for Excellence in Design in 1999, and the Academy Award in Architecture by the American Academy of Arts and Letters in 2000. In May 2008, Jesse Reiser and Nanako Umemoto were awarded the Presidential Citation from President George Campbell of the Cooper Union for outstanding practical and theoretical contributions to the field of Architecture.