Modern Architecture and the Open Society: Work and Ideas of Jaap Bakema (1914-1981) 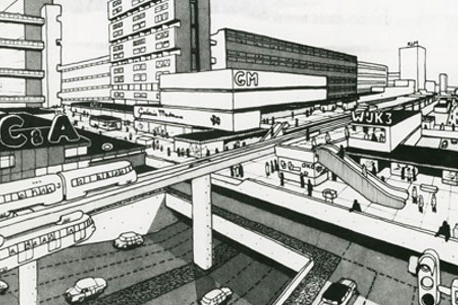 Jaap Bakema and the Open Society is the first extensive publication on the Dutch architect Jaap Bakema, who was a key figure in modern architecture throughout the post-war decades. Bakema was inspired to build for a democratic and open society. His body of work, his teaching and writing, and his international presence are testimony to the vicissitudes of the welfare state and the roles played by architecture and planning in its construction.

In the midst of the ongoing neo-liberal crisis of today and its conservative cultural fall-out, the recent history of building for an open society has regained relevancy, in particular in light of the current debates on how to counter the housing crisis and our crumbling welfare states. Brought back from the past Bakema’s legacy functions as a mirror to remind us of the radical potential of architectural conceptualization in its commitment to societal questions.

Dirk van den Heuvel is an Associate Professor of Architecture at TU Delft, and head of the Jaap Bakema Study Centre at Het Nieuwe Instituut, Rotterdam. In 2017 Van den Heuvel was awarded with a Richard Rogers Fellowship from Harvard GSD for his research project Socio-plastics on New Brutalism in architecture with regard to British welfare state politics. He was the curator of the Dutch pavilion for the 14th architecture exhibition of the Venice Biennale in 2014. Van den Heuvel was also curator of the exhibition 'Structuralism' at Het Nieuwe Instituut in Rotterdam (2014), together with Herman Hertzberger. Other notable exhibitions and/or publications include: ‘Team 10 – In Search of a Utopia of the Present’ (2005), ‘Alison and Peter Smithson – from the House of the Future to a house of today’ (2004), and 'Architecture and the Welfare State' (2015).

Currently, Dirk is a visiting fellow at MADA, Monash University and his talk is made possible by the generous support of MADA.