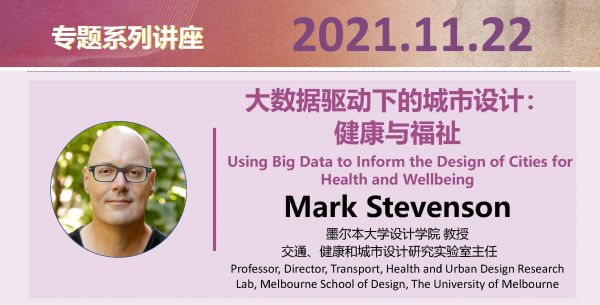 Professor Mark Stevenson will present a Keynote Lecture titled 'Using Big Data to Inform the Design of Cities for Health and Wellbeing' at International Academics Week at the Harbin Institute of Technology (HIT), China.

Professor Mark Stevenson is an epidemiologist and Professor of Urban Transport and Public Health at the University of Melbourne. His appointment is across the Melbourne Schools of Design, Engineering and Population and Global Health. He is a National Health and Medical Research Council (Australia) Research Fellow, an Honorary Professor in the Peking University Health Science Centre, China and an advisor for injury to the Director General of the World Health Organisation. Prof Stevenson has worked on numerous national and international projects that have directly influenced transport policy and worked with both Federal and State Governments in Australia and internationally. He has led many research groups and is internationally recognised in the field of transport safety and public health. Prof Stevenson is the director of the Transport, Health and Urban Design research lab comprising a cross-disciplinary research team exploring how the effects of urban form and transportation influence the health of residents in cities.