The Australian Centre for Architectural History, Urban and Cultural Heritage (ACAHUCH) officially launched as a research centre on 5 September 2017 with the Vice-Chancellor Glyn Davis and Deputy Vice-Chancellor (Research) Jim McCluskey in attendance. 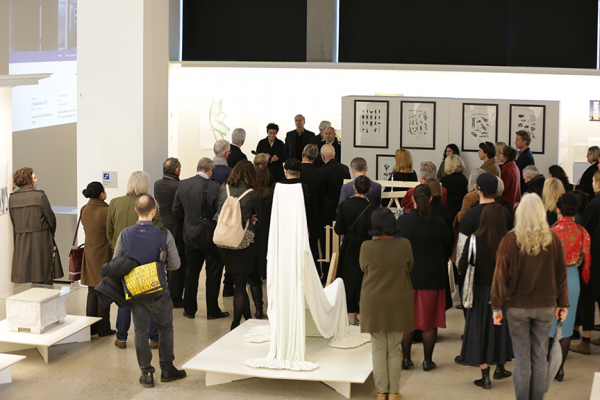 Based within the Melbourne School of Design, ACAHUCH has been established to promote and undertake high-quality, collaborative and interdisciplinary research in the design, application, theory, history, politics and cultural significance of architectural, urban and cultural heritage.

Centre co-director and Dean of the Faculty of Architecture, Building and Planning Julie Willis opened the proceedings on the role of heritage in society and the dynamic change affecting the way we interact with heritage.

“Heritage and conservation have helped shape Australian society and culture, influencing the way we interact with our cities and the surrounding environment.” Julie continued, “As cities change faster than ever, it is crucial that our history, knowledge and stories are shared and not lost.” Kate Darian-Smith, fellow centre co-director spoke about the crucial leadership role that the University of Melbourne and ACAHUCH plays globally in the architectural history and cultural heritage space.

“Melbourne has the highest concentration of architectural historians within Australia and possibly the Southern Hemisphere.”

This concentration of expertise was translating into student success in the Master of Urban and Cultural Heritage program, as emphasised by Vice-Chancellor Glyn Davis.

“ACAHUCH has played a significant role in helping Master of Urban and Cultural Heritage graduates find work with external bodies which support the centre such as City of Melbourne and the National Trust of Australia.”

While the Centre’s launch was last night, ACAHUCH has been busy since its inception with a number of engagement, teaching and research activities giving form to ACAHUCH’s future vision. This has been made possible through the support of many people.

Third co-director Philip Goad said, “ACAHUCH has hosted a series of special symposiums, public lectures, exhibitions and events; published a number of books; begun ongoing research projects; and brought oversight of the Master of Urban and Cultural Heritage program by bringing in prominent alumni in the field in contact with our students. We’re incredibly lucky to have a supportive community willing to give back.”

“I’d also like to acknowledge the support given to us by external bodies like the City of Melbourne, National Trust of Australia, Lovell Chen, ICOMOS Australia Mentoring Scheme, Working Heritage and Parks Victoria.”

ACAHUCH’s next upcoming event on 21 and 22 September is a symposium on ‘Haunting, Memory and Place’, convened by ACAHUCH members Dr Gareth Wilson and Dr Rebecca McLaughlan.

More information and registration on the upcoming event here.