Saaranya Kumar Dasari hails originally from Akividu in the south-east of India. After moving to Chennai to study a Bachelor’s degree in Civil Engineering, Saaranya has made his biggest globe-trotting leap yet: a semester abroad here at the University of Melbourne, based in the Melbourne School of Design. 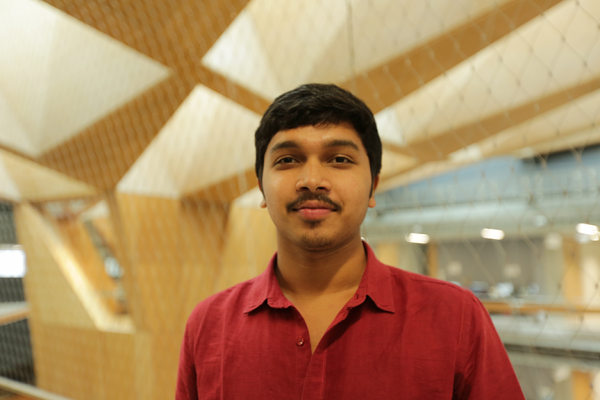 “I’m really enjoying my time here so far, the University has an excellent reputation which attracted me to come here. I love the architecture, the climate and the students here,” Saaranya says.

The MSD visited Chennai in 2015 where Assistant Dean (International), Dr Toong-Khuan Chan (referred to as TK) was referred onto potential students like Saaranya who wanted to study abroad. After some correspondence, Dr. Chan (TK) encouraged Saaranya to come to Melbourne. Saaranya extended particular thanks to TK for helping him adjust to University life here.

“TK has been one of my biggest supporters helping me prior to coming and now during my stay. He has taken me on site visits at various University sites as well as given me the opportunity to visit the Bates Smart office.”

There are many differences between the higher education systems in India and Australia.

“In India, the majority of undergraduate degrees are four years rather than three years. The assignments are also more practical here and help me to apply classroom knowledge into real-life situations” Saaranya adds, “Students here are independent learners, yet more friendly and less competitive compared to back home.”

As an aspiring civil engineer, Saaranya has enjoyed taking subjects in construction and sustainable building systems. His time here has helped shape the direction of his future and given him a more global perspective and skillset.

“I hope to use some of the knowledge I’ve learned here and apply it in my own community to solve issues. Being here has inspired my own interest in future-proofing buildings as a potential research topic to think about in my further studies” says Saaranya, “Understanding the different technologies, techniques, sector environments (high labour costs in Australia) and construction standards will be invaluable when I go out into industry.”

When asked about his favourite spots on campus, Saaranya responded with campus spots old and new.

“I love the MSD building as the light shines through the roof into the atrium during the day. Plus I’ve never seen a suspended classroom before, or the Wishbone beams in the basement of the library. I also love the Old Arts building – the sandstone structures are impressive and durable; to think that this building has stood for over 100 years makes it one of my favourites.”

The University and the MSD wishes Saaranya a warm and enjoyable time during the rest of semester two here.