Kristine Slawinski is currently undertaking a Master of Urban and Cultural Heritage at the Melbourne School of Design. She has a background in interior design and is currently working at GML Heritage as a heritage consultant. Kristine’s father’s family arrived in Australia from Poland in 1950, and she helped him write his autobiography including his experiences at Bonegilla migrant camp.

The Immigrant Networks exhibition is the result of extensive research by an interdisciplinary curatorial team including Professor Anoma Pieris (Architecture), and Associate Professor Andrew Saniga (Landscape Architecture, Planning and Urbanism) from the Faculty of Architecture, Building and Planning. Read Kristine’s illuminating review of the exhibition below. Drawing on the broader theme of post-war immigration to Australia, Immigrant Networks broadens our understanding of the network of places and industries important for our country’s post war industrialisation. It also links the social significance of these places with the evolution of our rural and urban environments, examining theimmigrant contribution to the development of post-war Australia through a different lens.

Rather than perpetuating a familiar narrative centred on progress, nation building, and government initiatives, the curators firmly anchor peoples’ everyday and work lives within these often de-humanising places. By foregrounding their often unheard voices and reconnecting them to the spaces of their industry, the exhibition uncovers the personal and emotive experiences of immigrant labourers and their families deepening our understanding of this important phase of Australia’s history.

Individual experiences are tied to place-based case studies - the Snowy Hydro Scheme, Port Kembla Steelworks, Greta and Benalla Migrant Camps, Woomera Village and Long Range Weapons Establishment, and the outer Melbourne suburbs of Footscray and Springvale. This connection embeds stories of human displacement from places outside Australia and personal struggles in this country within sites celebrated for their contribution to post-war nation building.

The exhibition team points out that these exhibits are ‘selective’ and challenges us to fathom that what is presented here is a small representative sample, and that these stories must be multiplied by hundreds of thousands if we are to fully acknowledge the role of labour migrants in this phase of our shared history. 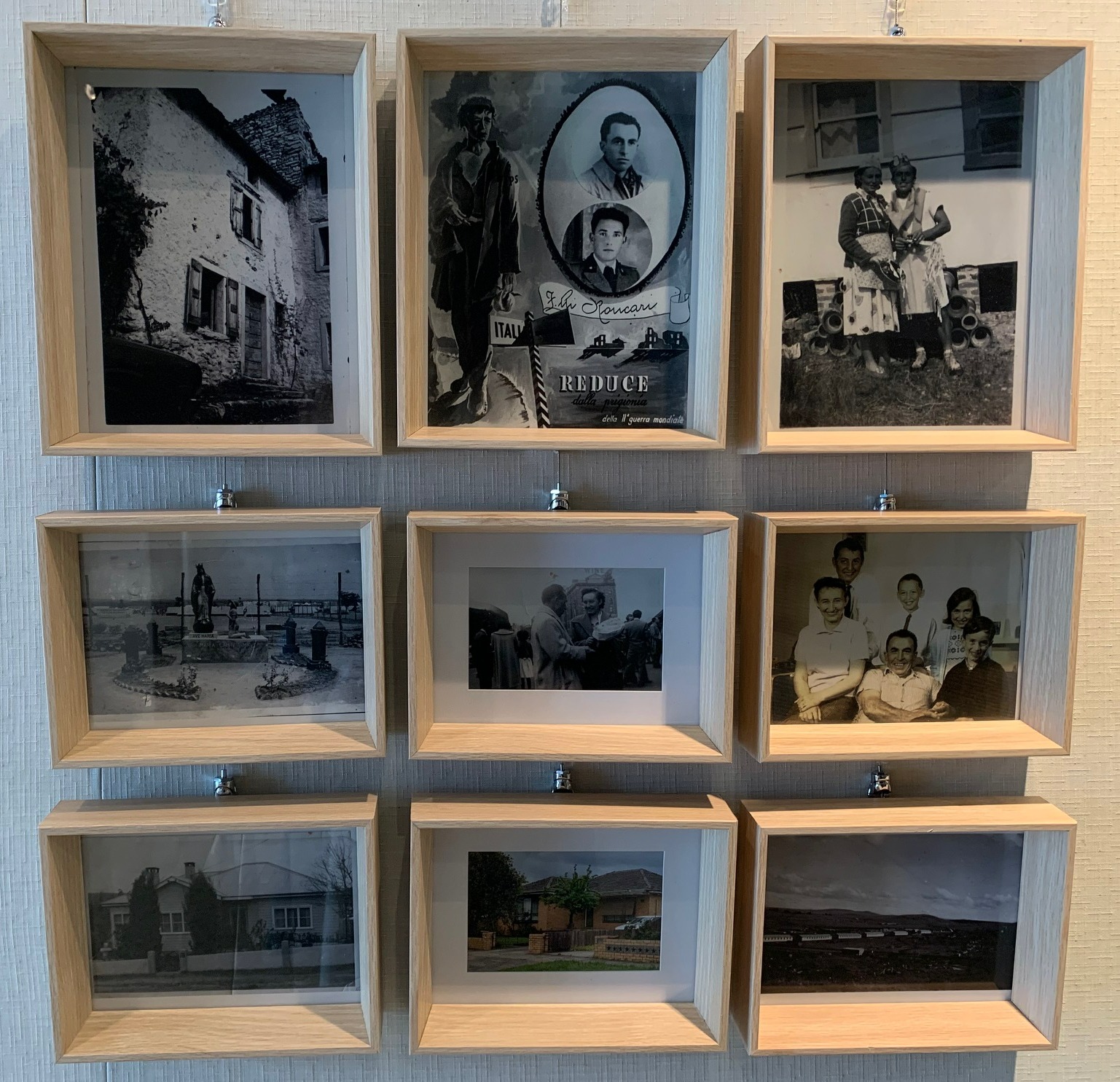 The focus on the often overlooked individual and human contributions to these important phases of Australia's history provide the opportunity to truly understand the experiences and backgrounds of those employed on these projects. It is like being taken inside these structures to humanise the actvities taking place in the context of a post-war industry drive, and provides a new appreciation of the often poorly understood transnational histories which converged here post-war to ultimately create the cultural milieu of modern-day Australia.

In the early years of the period covered by the exhibition (1945-1979), immigrants had signed labour contracts as a condition of entry to Australia and were housed in camps initially while working as indentured labour on various infrastructure and nation-building projects, and later when domiciled in suburban areas in factories or in their own enterprises. These workers dedicated time, energy, and skills, often in very trying conditions. The common theme of the research - the influence of immigrants on the shaping of these places - is presented in an evocative visual rather than written format, which makes the work accessible to a broad audience.

Alexandra Dellios from the Australian National University brings us to Greta and Benalla migrant camps, previous department of defence training sites with a strong military aesthetic which were used to house the new arrivals. The rigid, rectilinear and regimented historical plans of the camp layouts are brought to life through the inhabitant’s voices, detailing stories of kids collecting bullets from the old firing range and polishing them up to trade with other camp kids and of the smells of ‘migrant’ food wafting through the camp. 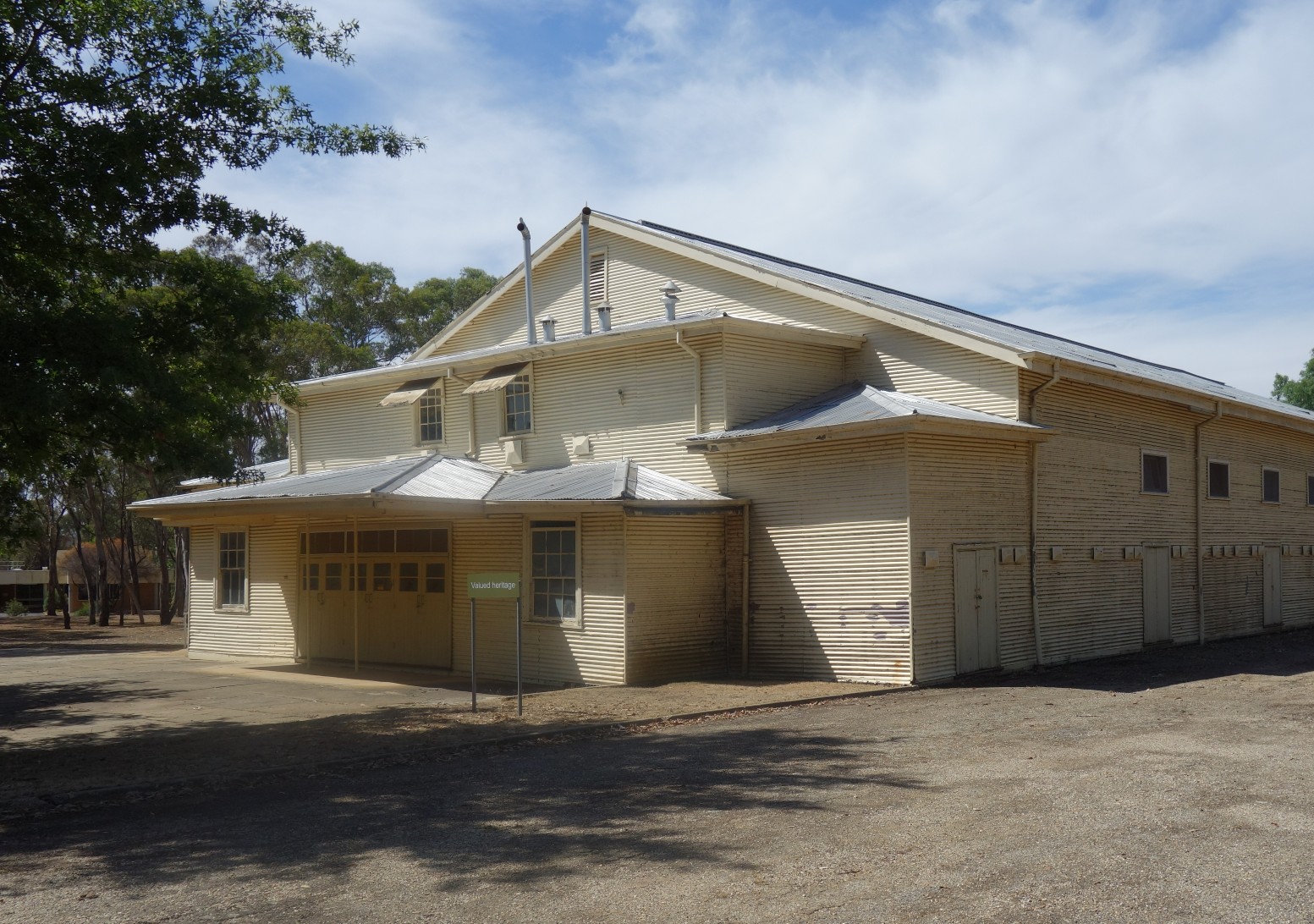 The coldly bureaucratic terminology used in papers from the archives describing “processing centres” accompanied by statistics, lists and numbers and the proposal to “feed dependants from Bathurst and Bonegilla into specified holding centres,” is counteracted by family photos taken at the camps, showing us the faces these pieces of paper refer to – mothers holding babies, young children on tricycles and teenagers hanging out.

Anoma Pieris transforms her significant research data into a visual display of worker accommodation on the Snowy Hydro Scheme’s work camps and townships. Finely constructed balsa wood architectural models record the prefabricated housing types developed for the project. She presents the Snowy Scheme as experienced by the newly arrived Roncari family who build their first home in Cooma North the Company Town constructed to house a large part of the thousands of workers engaged on this massive infrastructure project. A series of photos grouped together in timber frames recount the Roncaris’ experiences with such warmth that we seem to be gazing at the loungeroom wall of their family home.

Mapping and images from workers’ camps detail the Roncari’s journey from Cerro Veronese in Italy via Warrah station, on to Cooma. Historical photos and architectural plans of the family’s houses convey their efforts to maintain family life and cohesion at many points along their journey before they eventually settled in Dandenong.

BHP Steelworks in Port Kembla was heavily reliant on post war immigrant labour, with the nearby suburbs expanding to support the workers employed in these massive factories. Mirjana Lozanovska at Deakin University conducted extensive fieldwork to document the vast industrial interior spaces of the unforgiving Steelwork’s landscape, in stark contrast with the personal stories of the workers assigned to work there. 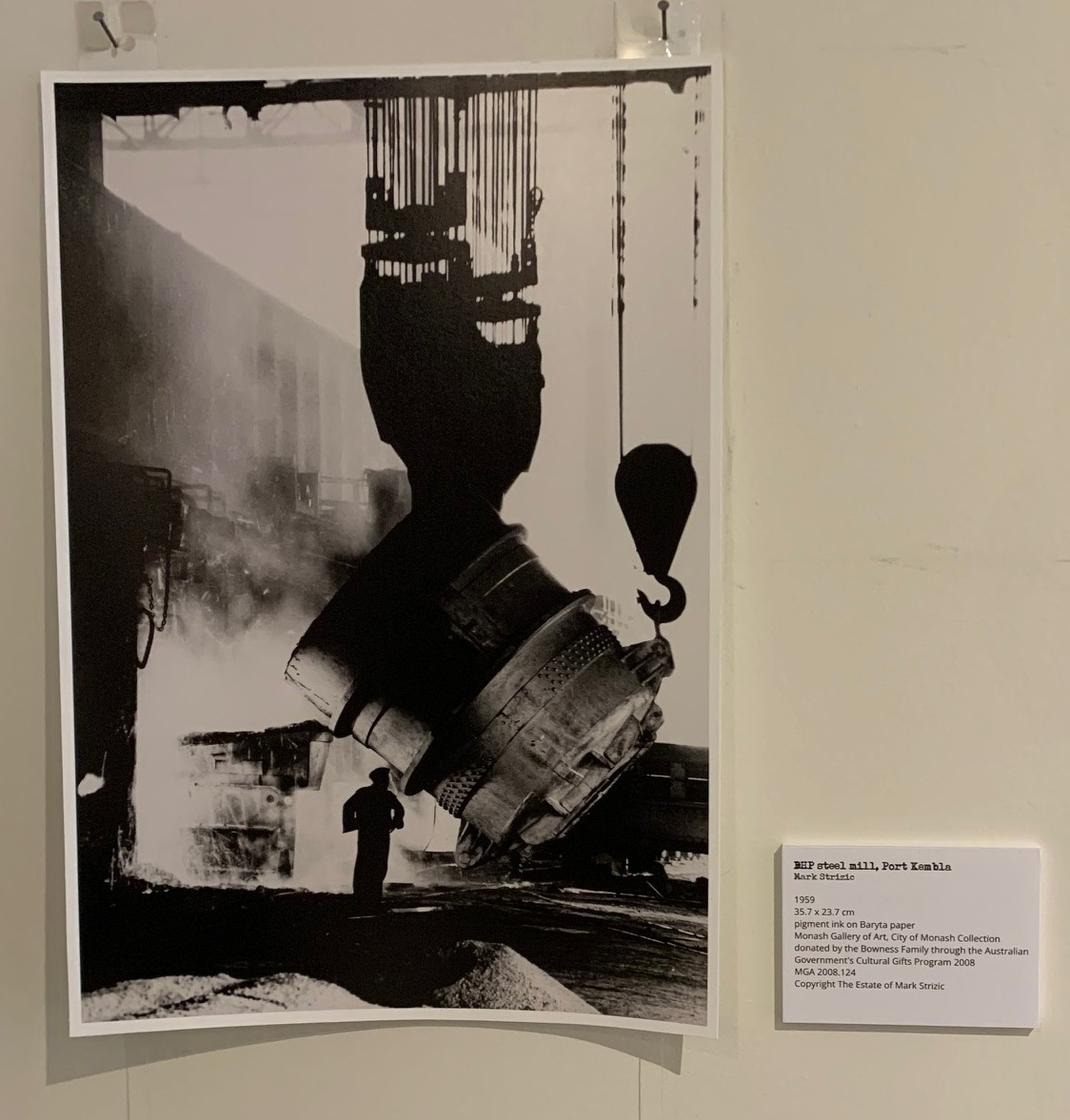 This tension is encapsulated in a striking black and white photo by Mark Strizic taken inside the steelworks in 1959 showing the figure of a lone worker, silhouetted against the glow of the furnaces, dwarfed by a giant crucible that is being hoisted up by a mechanical rig. The interior of the steelworks is recorded in intricate digital and physical models created by the research team. Quotes extracted from interviews confirm the brutal conditions and the human reactions to them: “smoky, noisy, very hot,” “crying, homesick, very unhappy,” “lost eyelashes, eyebrows, hair burnt. Dusty, steamy, smell of coke.”

You may have heard of the Woomera rocket testing range, located in the hot and dusty outback desert of South Australia, but few are aware of its connection to the post-war immigrants who unwittingly found themselves assigned to live and work there in 1948 and 1949. Andrew Saniga’s research behind this exhibit uncovers their personal stories. These new arrivals were employed as labourers, technicians and engineers, and also provided unacknowledged, voluntary labour for community initiatives like building gardens to soften the harsh environment and assisting with church building.

A series of 14 photographs conveying the experience of the European migrants seeks to rectify this injustice and is presented as an analogy for the Catholic Church’s stations of the cross. As Andrew also points out, this township previously occupied by displaced persons, served to displace the local First Nations people from their traditional lands. The series of evocative photos records the decaying historical fabric of sites now in ruin, being reclaimed by the desert landscape. 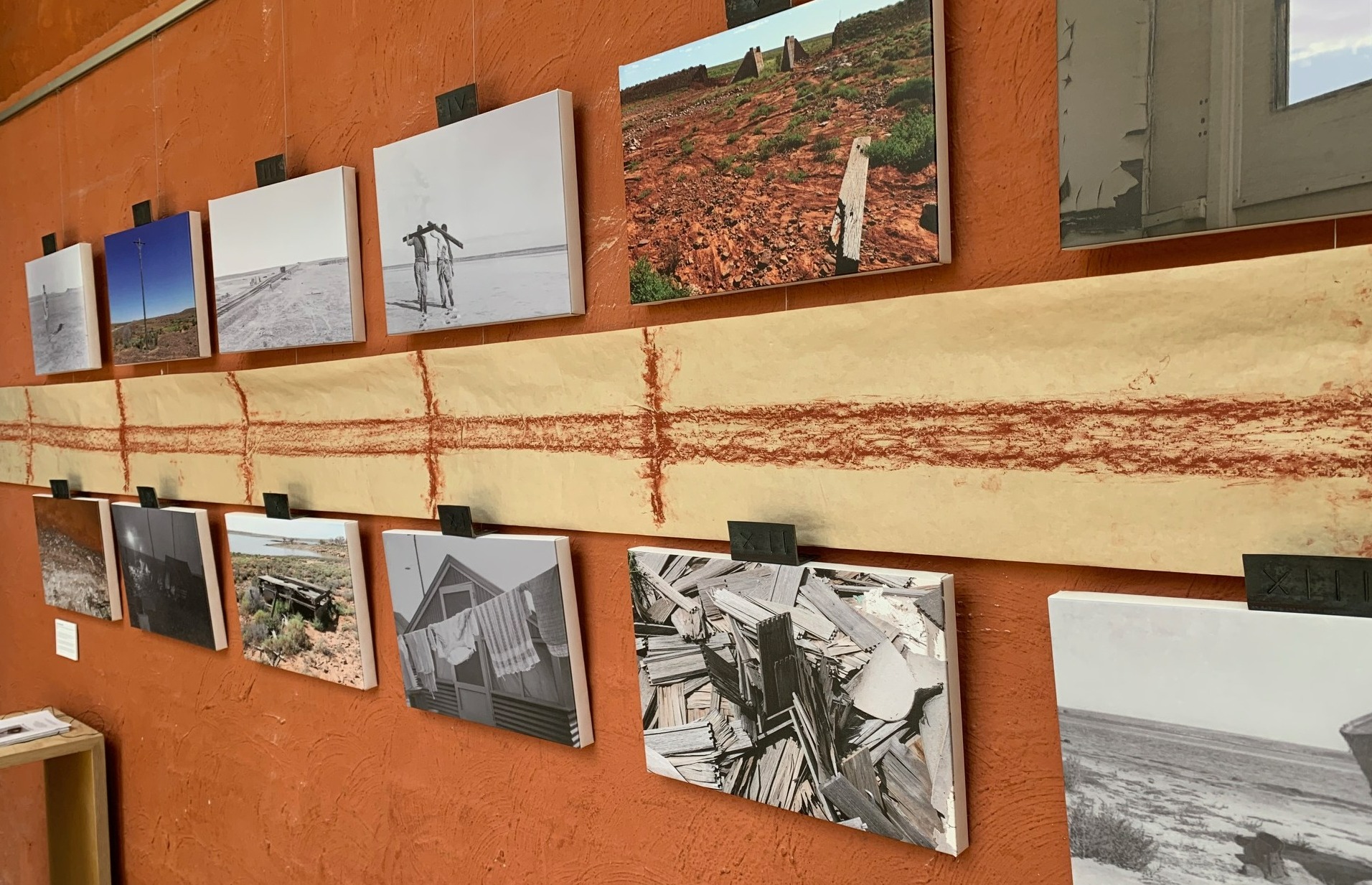 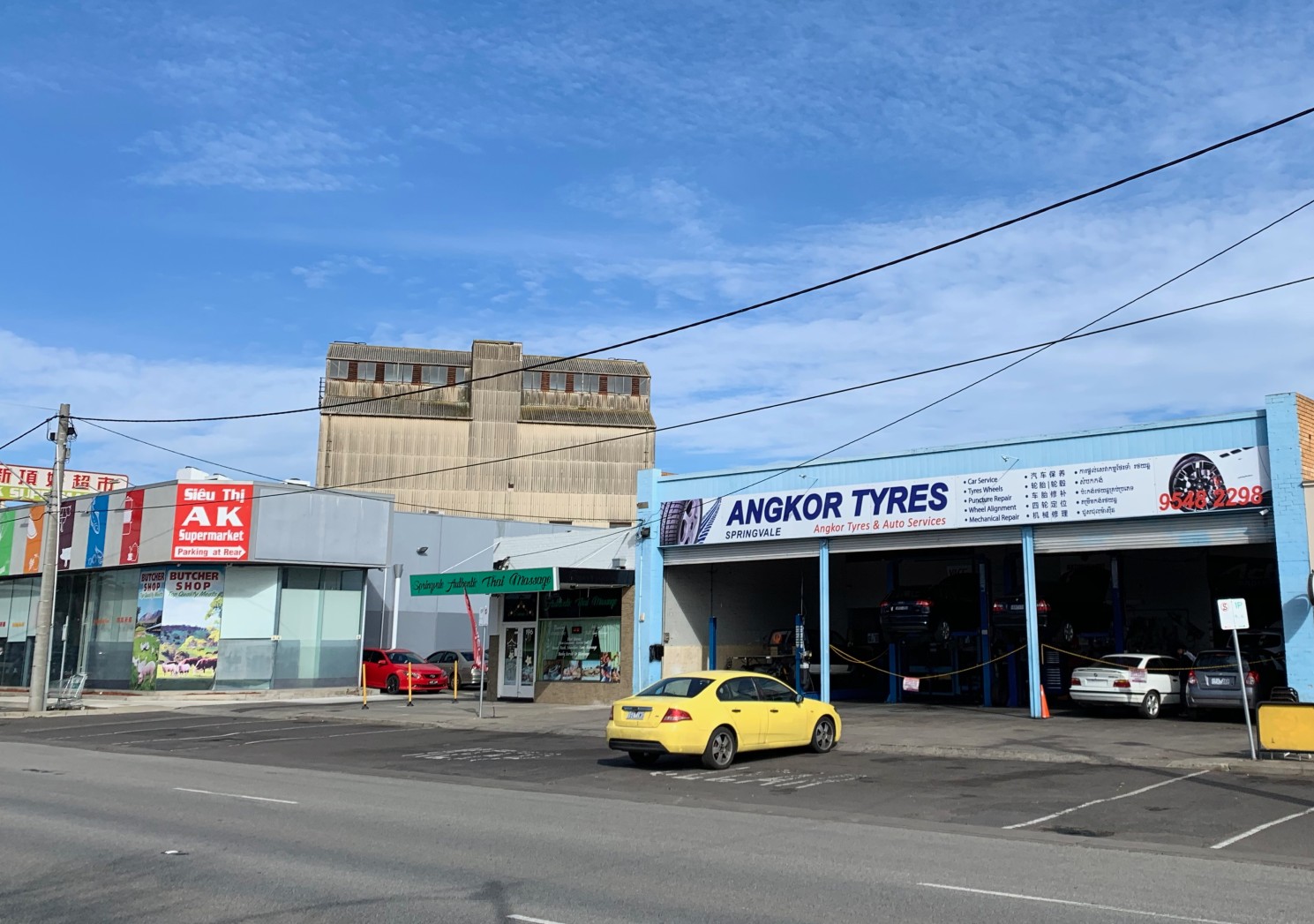 The 1970s and 1980s saw a new influx of immigrants from countries such as Vietnam, Laos and Cambodia. These immigrants had to quickly find work in the areas surrounding the migrant reception hostels, many in manufacturing industries, others setting up small businesses. Their communities thrived.

David Beynon from the University of Tasmania conducted research into how these new communities impacted Melbourne’s suburbs, including how the gradual establishment of immigrant networks layered new and different cultural features onto the existing built fabric. Suburbs such as Footscray and Springvale are presented in elongated photomontages which convey the spatial transformation of existing buildings and streetscapes. A series of invented tools on display provide social insights into the ingenuity and hard work which was carried out by the workers in the ‘invisible’ spaces of converted domestic loungerooms or on factory floors.

Immigrant Networks is not so much a celebration of the migrant experience, but more a representation of a complex social and cultural history which is firmly anchored in the built architecture of these specific places. Personal stories weave in and out of various locations along these immigrants’ journeys to become subtly embedded in the narratives of contemporary Australia. 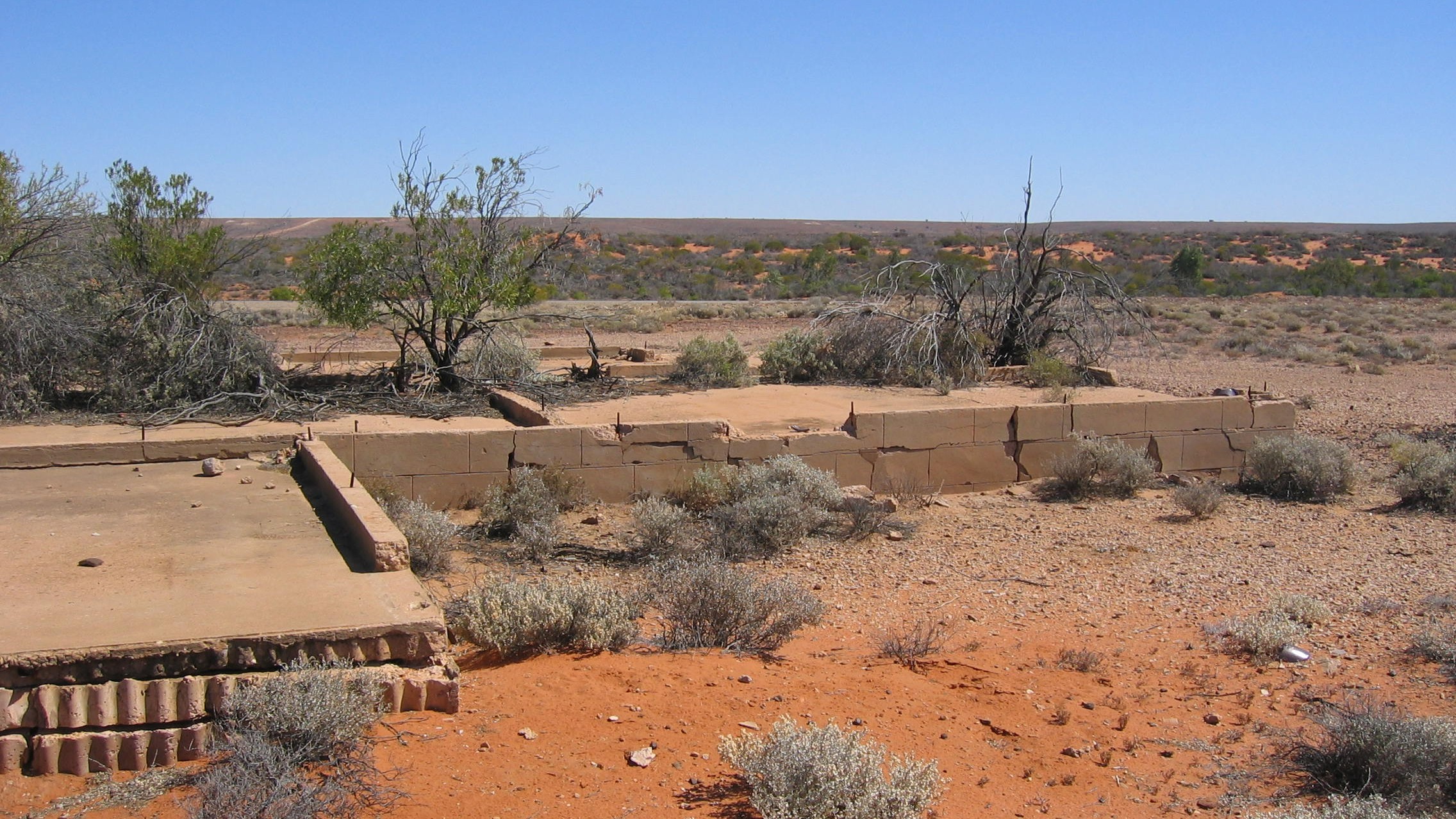 The exhibits locate them within the processing centres, holding stations, reception centres, industrial sites, and factories, moving into domestic houses as the immigrants eventually find their feet and create a home. It contrasts their humanity and resilience against the monotone industrial backdrop of factory machinery and furnaces and ‘nation building’ infrastructure.

They bring new meaning to historical maps, plans and images extracted from the archives by attaching new layers of social significance and individual experience to familiar historical themes. The human element presented in this exhibition validates the individual efforts of those who worked hard to forge new lives in Australia, and gave more than they ever took.

The exhibition was made possible by the Australia Research Council Discovery Project DP190101531(2019-2022), Architecture and Industry: The migrant contribution to nation-building 1945-1979, with an interdisciplinary team from The University of Melbourne, Deakin University, The University of Tasmania, and The Australian National University.