The Faculty of Architecture, Building and Planning enjoyed a year of increasing collaboration and interchange with Tongji University in 2017.

The Faculty’s partnership with Tongji University’s College of Architecture and Urban Planning (CAUP) has opened up key opportunities for knowledge exchange and learning outcomes for students and staff alike across both institutions, including a student exchange agreement. 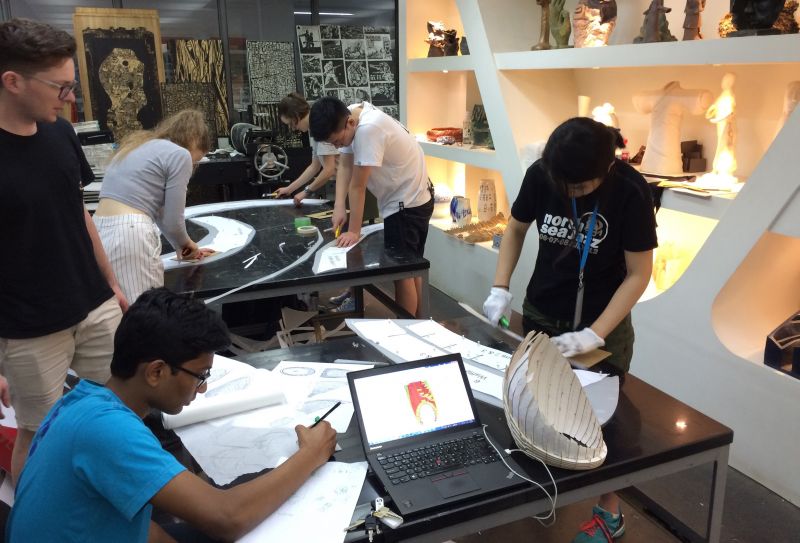 The University of Melbourne took part in the Tongji International Construction Festival for the first time in June 2017.

Five Bachelor of Design students, along with Lecturer Paul Loh, and Senior Tutor Matthew Greenwood travelled to China to participate in the annual festival. This included a competition for first year architecture, urban planning and landscape design students from around the world. The teams participated in a global exchange of ideas and culture, in a valuable design and learning experience.

During the festival, the University of Melbourne team designed and assembled a pavilion structure using polypropylene sheets. The theme for the 2017 competition was ‘micro community’, with each team designing an individual structure, to jointly form a temporary community in the CAUP square. Participants investigated the spatial and material properties of the polypropylene and developed a working prototype as a precursor to designing and constructing the final structure. The team then assembled the structure over one eight-hour day.

“The idea was to design a space that people can use to retreat from the urban environment and have a sense of privacy in,” explains Mr Loh. The team of first year students, who had only completed one semester of design studios, faced a steep learning curve. “To design and construct a full-scale structure in five days is demanding and our students certainly rose to the challenge,” says Mr Loh. The students explored structure, computational design and making in an intense environment, giving them a real taste of what it means to build something from concept to completion.

In addition to gaining designing and building experience during the festival, students enjoyed the opportunity to visit a new metropolis with a different culture. Mr Loh said the students felt they had developed skills that would stay with them for a long time.

“Tongji University did an amazing job organising over 30 schools internationally and within China,” says Mr Loh. “We felt very much a part of the local community.”

The 13th annual Tongji CAUP International Design Summer School program in 2017 was titled ‘Landscape Regeneration: The Revitalization of the Waterfront Portal’ and ran for two weeks in early August. Six landscape advisors from China, Australia, the USA and Uganda each supervised a group of approximately six students. The students – including Melbourne School of Design Master of Landscape Architecture student Antonia Besa Lehmann – came from different disciplinary backgrounds (landscape architecture, architecture, city and regional planning, urban design, geography, and, community development) and from a range of countries including China, Australia, USA, Germany, United Kingdom, Canada, Austria, and South Korea. This broad range of students and staff made for a unique and rich experience both from an intellectual point of view, but also in terms of meeting new people. The program, hosted by Professor Wang Yuncai, Associate Professor Dong Nannan and Associate Professor Dai Daixin, provided an opportunity to share ideas, opinions and experiences in the context of Shanghai’s vibrant city.

The project was the reclamation of a post-industrial site at the confluence of the Huangpu River and Yangtze Rivers.  The site, located within the Baoshan District, included a strong military history and associated built fabric – most of the groups made it their quest to somehow incorporate military history into their schemes. The brief however was essentially to redefine the waterfront while simultaneously establishing a visual and physical ‘portal’ to the city of Shanghai given the site’s location at the head of the Huangpu River. Coincidentally, the site is also quite near Shanghai’s major cruise ship terminal that had been constructed in recent years.

The group of students led by Associate Professor Andrew Saniga created a scheme essentially based on the construction of an island, accepting the premise that ‘everybody loves an island’ and that the lure of the ‘island’ as a destination point might help sell their scheme to the design jury and the public alike. In what became a crash-test-10-day design project their scheme resulted in a Las Vegas skyline manifested in a Venice-style site plan, to complement the Shanghai skyline and Bund a mere 15 or so kilometres upstream in Shanghai’s thumping metropolis. Their project asked whether it could be possible. Adjacent to their proposed island they reclaimed the coastal margin, mixing wetlands and military ruin in a melancholy interpretation of the site’s post-industrialisation past. Ultimately, their aspiration was to engage the local community.

Blurring the boundaries between design and ecology

Dr Margaret Grose was one of three international speakers invited to take part in the inaugural Tongji University Advanced Lecture Series about frontiers in ecophronetic practice research, held from 31 May–2 June 2017 in Shanghai. She presented a lecture about the use of science in design, and led a charrette involving academics in landscape architecture and planning from across China.

The Advanced Lecture Series is concerned with landscape and planning, with a strong focus on ecological design and planning. The convener of the series is Professor Wei-Ning Xiang, who holds posts at both Tongji and North Carolina.

The invitation arose from a paper Dr Grose wrote for Landscape and Urban Planning, titled ‘Gaps and futures in working between ecology and design for constructed ecologies’. The paper crosses the difficult divide between ecological science and design practice and teaching, and is a pointer to new directions. A recent trend in ecology has been increased engagement with areas traditionally the territory of designers and planners. As ecologists and designers change their boundaries, habits of thinking need to match. A focus on attitudes to data, the increased role of the experiment in design, linking data to design, and the role of culture will help close the gaps between these two areas.

Dr Grose was a guest of the Tongji CAUP, and her host was Professor of Landscape Architecture Yuncai Wang. The sessions were not confined at all to Tongji; the audience were mainly young academics and postgraduate students from across China. All the participants were keen to be part of addressing the pressing ecological issues that China is facing. 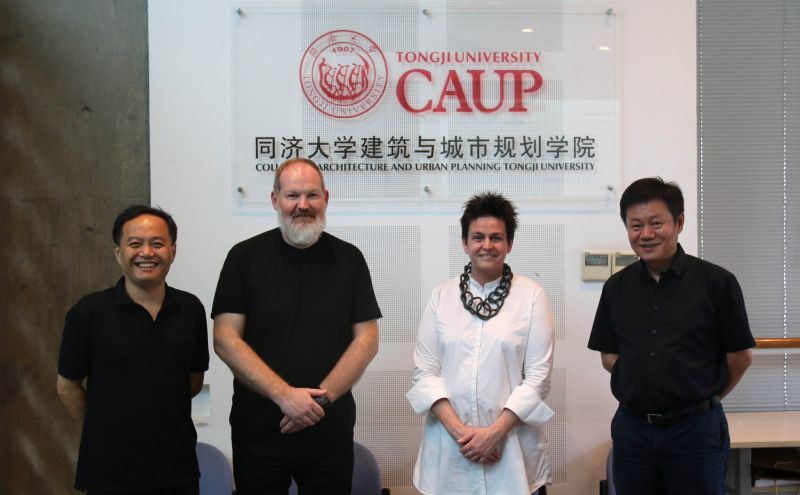 In August 2017 Professor Julie Willis travelled to Tongji University for her first official visit as Dean of the Faculty of Architecture, Building and Planning. Professor Alan Pert, Director of the Melbourne School of Design, joined her as they met with Professor Sun Tongyu, Vice Dean (Academic Studies) and Professor Cai Yongjie, Head of Architecture at Tongji CAUP.

The professors identified and discussed fields of mutual interest to both universities, including research collaboration opportunities. Heritage preservation and sustainable urban design stood out as key areas for both institutions.

The visit also created an opportunity to discuss a new exchange program between the University of Melbourne and Tongji University. The Faculty of Architecture, Building and Planning has four undergraduate Bachelor of Design students attending Tongji University on student exchange for Semester 1, 2018, funded via the New Colombo Plan grant the Faculty received.