Alumnus Stephen Yuen featured in this year's program for The Mental Health Services Conference in Adelaide, presenting his Master of Architecture thesis on the potential of virtual reality for therapeutic support. For his Master thesis at the Melbourne School of Design, Stephen investigated the phenomenology of virtual reality (VR) architecture and its impact on mental wellbeing. Supervised by MSD Research Fellow, Dr. Stephanie Liddicoat, Stephen generated multiple VR environments which sought to support individuals with social anxiety.

"What I find fascinating about VR spaces is the way it can hook into your body's sensory system," says Stephen, "If being in certain physical spaces can alter our state of mind, imagine the potential for therapeutic services if we could transport ourselves into architecturally informed spaces which evoke states of calmness or self-worth by simply wearing a device we carry around in our bags."

Following the successful completion of his project at the end of 2017, Stephen saw that submissions for research papers had just been announced for The Mental Health Services (TheMHS) Conference to be held in Adelaide the following year. With international delegates including clinicians, consumers, carers, and researchers, the annual TheMHS Conference is an interdisciplinary event which seeks to cultivate knowledge and new ideas about mental health within a diverse network.

Stephen was selected to present a research paper co-authored with Dr. Liddicoat which featured his thesis project as a pilot exploration into how VR environments could be designed as a practical tool for therapeutic support. 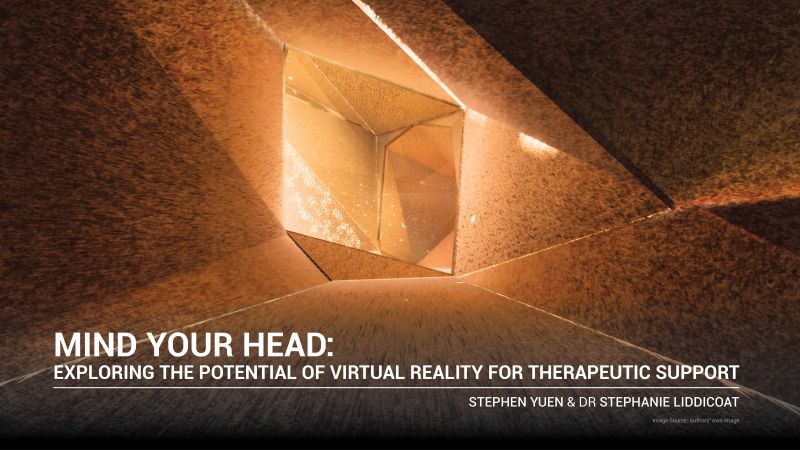 "Speaking at a conference for the very first time was an insightful opportunity allowing me to engage with other researchers, clinicians and consumers about the ideas put forth from my thesis. Not only was it wonderful to share the findings of my project outside the architecture sphere, but I also gained a greater understanding into the complexities involved with designing VR environments that could be utilised within the field of mental health," explains Stephen.

Stephen is currently working full-time in architectural practice, and intends to continue exploring how architects can operate within the VR and mental health industry in a multidisciplinary capacity. In addition to the conference, Stephen has presented VR work at a public exhibition and moderated panel discussions on the topic of virtual reality.

"Through being given the opportunity to explore an area of architecture that truly interests me within my Master degree at the MSD, it has allowed me to set a strong trajectory towards my future career, and helped me form a clearer perspective of how our roles as future architects may evolve," reflects Stephen, "One aspiration of mine is to become involved in a research-based practice which utilises VR. I would love to see a branch of architects adopt the role of digital craftsmen, who design spatial experiences in the virtual realm in collaboration with other industries such as the mental health sector."

If you would like to contact Stephen for consultation on virtual reality projects, Stephen welcomes you to get in touch with him via LinkedIn.