In December 2019, Master of Architecture student Victoria King found out she’d been awarded the prestigious RIBA President’s Silver Medal 2019 for her project ‘Surface Tension: Blueprints for Observing Contamination in the Sydney Harbour Estuary’ created as part of her Independent Thesis studio. Now graduated, we caught up with her to find out more about her award-winning project.

Congratulations on this fantastic achievement. Can you tell us a little about your winning project ‘Surface Tension’?

The project was completed for my final thesis studio at the MSD with Professor Gini Lee and Professor Alan Pert. It proposes a network of marine observation facilities across three sites of post-industrial instability within the Sydney Harbour Estuary. In doing so it aims to bring the systemic pollution wrought by industry into the cultural currency of the Harbour today. Three maritime relics were selected and repurposed as productive infrastructure: the site of the proposed Western Harbour Tunnel, the Goat Island Shipyard and the former Training Depot at Snapper Island.

What was the motivation behind the idea for ‘Surface Tension’?

The motivation came from a number of places that seemed to coalesce for me into a compelling project proposition. I was interested in the tension that exists between the industrial and maritime legacy of the ‘working Harbour’ and its fragile status as one of Australia’s most biodiverse estuaries. In many instances, there is a direct conflict between these two conditions in the Harbour where relic infrastructure has modified natural shorelines.

On the one hand these sites stand as a testament to the working lives of a maritime trade that once sustained the Harbour, and on the other, they represent the destruction that industry brought to the original estuary landscape. Both of these conditions remain largely unseen, outside of our immediate focus. I was interested in drawing attention to sites where this tension was unfolding in real-time, in the Harbour today.

Did your initial concept change a lot throughout the process of producing your thesis?

The scope of the project shifted considerably throughout the semester and was guided with the help of my supervisors. I think that one of the hardest and, ultimately, most satisfying processes that one goes through in any project is the distillation of expansive research, testing and speculating, into manageable chunks of design.

It was hard not to become distracted by a new piece of information or anecdote and go down a rabbit hole of research! I tried to move methodically through this process by developing a set of drawings that recorded my findings at each stage, and by working concurrently between macro and micro scales.

What has winning the RIBA Silver Medal meant to you?

Winning the RIBA Silver Medal has highlighted for me, and I hope for other students, that pursuing a local or personal agenda within a project can find relevance and recognition in the most unlikely contexts.

Of course, there were some universal themes that underpinned my work, but looking back, a primary focus was to paint a more detailed picture of Sydney Harbour. Alan Jones, President of the RIBA, made mention in his address that the Silver Medal has historically recognised the importance of ‘ideas’ in the development of buildings. I think this precedent affirmed the value of developing a personal language to represent ideas, which for me, was realised through detailed site investigation.

What were your thoughts when you first found out you had won the Silver Medal?

My first thoughts were honestly of disbelief…the experience is taking a while to sink in! Travelling to London and receiving the medal was an immense privilege and one that I will never forget. I wasn’t quite sure what to expect before the ceremony, however it was reassuring to meet with fellow students and members of the RIBA and realise that we share many common experiences, despite living on opposite sides of the globe. The surprise appearance of Lord Norman Foster, who presented my medal in recognition of his own Silver Medal, sixty years prior, was also a reminder of the rich history behind the award. 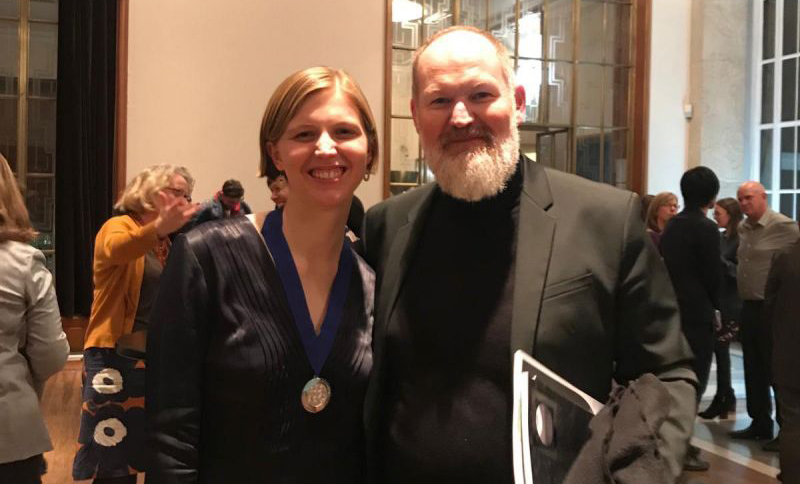 Image: Victoria with her thesis supervisor, Prof Alan Pert at the RIBA awards ceremony in London

Has this experience given you a new perspective on the standing of Australian architecture globally?

This experience has reinforced that Australian students are uniquely placed to describe the conditions of their local contexts and we have a responsibility to develop suitable responses to these conditions. Australia is a continent of climatic extremes, with a complex history and a rapidly growing, multicultural population. Important work is being done to engage with these issues in the built environment, and I think that there is a current atmosphere of openness and experimentation. Melbourne Uni students have so many opportunities to tap into this openness and to think creatively, with access to a broad range of subjects and innovative fabrication technologies.

Are you currently working as an architect?

I’m currently working as an architectural graduate at Weston Williamson and Partners, in their Sydney office. Over the last few months I’ve been working on masterplanning concepts for transport infrastructure to support urban and regional population growth. It’s been an eye-opening experience for me to think more deeply about the pressures we are facing in regard to future city liveability. Working at WW+P has very fortunately provided me with a connection to current practice in the UK and it was great to meet with the London team during my visit.

What do you hope to achieve in your career as an architect?

My hopes at the moment are less about material outcomes and more about contributing to new modes of practice in architecture. I think that we’re living in a very exciting and incredibly uncertain era, where strong collaborative work is needed to develop a new professional ethic that is sensitive, reciprocal, and listens closely to the world around us. My experience working as a student with landscape architecture and urban design practice, TCL, was influential in setting a personal agenda to work and think more consciously about the significance of what remains ‘unbuilt’, and the ecological, and cultural value tied to such contexts. I think this agenda is important not only for architects, but for all built environment practitioners.

What do you think the pressing issues are for your profession as someone relatively new to practice?

I think there’s an incredible responsibility felt by architects to mitigate the irreversible environmental impacts of climate change. The construction industry currently contributes toward one fifth of Australia’s carbon footprint and almost forty percent worldwide. By default, built environment practitioners are implicated in a complex economic system that’s steadily fuelling the warming of the planet. Navigating this dilemma might also act as catalyst to support another persistent issue - supporting greater diversity and cross-cultural sensitivity within the profession. I think that conversations around these two issues can be mutually supportive, by placing continued and equitable value on diverse voices, we might uncover new ways of responding to the environmental complexities that we face.

What type of contribution or impact do you think your generation will make with regard to the future of architecture? Or in particular, with solving some of the challenges facing the built environment?

I think that architects will engage more robustly with environmental fragility and with issues of inequity in the built environment. An out of sight, out of mind mentality is no longer applicable in the current climate and social context. An openness to interdisciplinary thinking and working will drive new solutions. Additionally, social media channels have enabled greater connectivity and a platform to engage with these challenges, and movements such as Architects Declare, for example, have worked very swiftly to mobilise collective support. I hope that more locally, our generation of architects will establish stronger frameworks to protect and preserve sites with intangible cultural heritage. In doing so we might work towards a built environment in Australia that openly acknowledges its shared, cultural history.

What made you want to study a Master of Architecture at MSD?

I was attracted to the diversity of subjects available at the MSD. The studios on offer provide opportunities to work with students in multi-disciplinary contexts both locally and globally. During my studies I was really lucky to be involved in projects that took me to parts of regional Victoria, remote towns in the Northern Territory and all the way to Torres Del Paine in Chile. These experiences have expanded my understanding of what it possible while navigating a career in Architecture.

Interested in studying the Master of Architecture?
Learn more