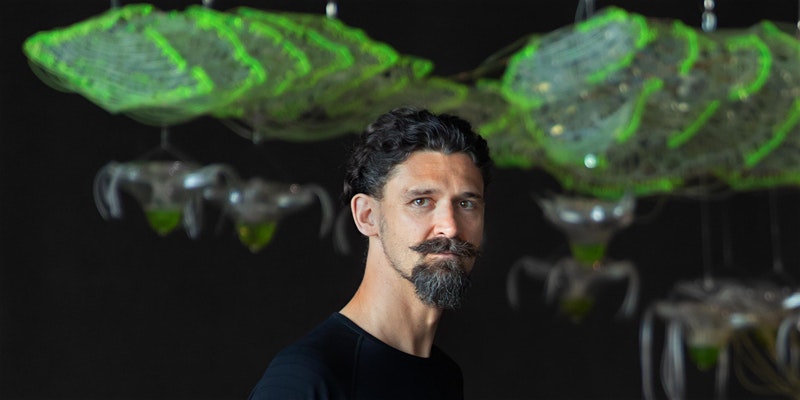 The impending ecological crisis has spurned a race towards re-greening our cities and our architecture. However, “green” ideology hides a nagging paradox. It proposes a sanitised vision of urban nature that renders it ineffective towards establishing a new circular economy of matter, information and energy.

The PhotoSynthetica project proposes an architectural habitat for the urban microbiome, foregrounding nature’s “dirty” side. Powered by the sun and monitored by AI, it hosts cultures of living cyanobacteria that feed on what buildings expel (CO2, pollution and heat) to grow high value biomass (energy and food).

Their in-human efficiency engenders a new kind of architecture. No longer a mere container of functions, like in the modern machine for living, it becomes itself a dynamic process of production, a living machine.

Marco Poletto is an architect, educator and innovator based in London.

He is co-founder and Director of the architectural practice ecoLogicStudio and the design innovation venture PhotoSynthetica, focussed on developing architectural solutions to fight Climate Change. In the past 10 years ecoLogicStudio has designed and built several living installations and architectures, demonstrating how microorganisms such as algae can become part of the bio-city of the future.

Marco holds a PhD Degree from RMIT University, Melbourne. His thesis on the “Urbansphere” argues that the increased spatial integration of non-human systems within architecture is crucial to evolve higher forms of urban ecological intelligence. He is also co-author of “Systemic Architecture” a book published by Routledge in 2012.

Marco has been Unit Master at the Architectural Association in London, Visiting critic at Cornell University and Research Cluster leader at The Bartlett, UCL. He currently Lectures at the University of Innsbruck and the IAAC in Barcelona.