Opportunistic urbanism leads our students to the Netherlands

In September 2016 eleven of our Masters students from both Architecture and Urban Design packed their bags and set off to the Netherlands for the experience of a lifetime. The travelling studio Opportunistic Urbanism provided an opportunity to explore and compare inner urban areas in South Holland and Melbourne. Students visited Amsterdam, Rotterdam and Delft, and were tasked with designing new integrated housing and working environments for challenging sites within the existing city boundaries of these cities. Led by Katherine Sundermann (MGS Architects) and Andy Fergus (City of Melbourne), the studio was developed in response to a request from Deltametropolis Association, a research organisation based in Rotterdam. “This urban think-tank was seeking international architecture students to design 'living environments' - places to live and work - for sites that they had strategically selected for densification”, explains Katherine, “they were looking for an international perspective for these underused sites, to uncover new approaches and possibilities for the development industry in the Netherlands”.

The students travelled across the cities on bicycle, visiting prospective project sites, iconic housing complexes from the 20th century in addition to more recent exemplars such as Silodam, Markthal (MVRDV) and De Rotterdam (OMA), along with leading Dutch architectural and urbanism offices. Both MVRDV and KCAP hosted studio visits, and at TU Delft students had the opportunity to meet and collaborate with leading academics, practitioners and key proponents of the ‘Dutch approach’ to urbanism, including Rients Dijkstra (director Maxwan) and Daan Zandbelt (director De Zwarte Hond).

Collaborating with TU Delft and Deltametropolis Association provided the perfect opportunity for our students to simultaneously apply their learnings to a real-world research project and to develop their own independent thesis projects. Students were required to consider a variety of housing and living typologies, which would also positively contribute to the wider community. “Students didn't just engage with design, but also the broader social, environmental, financial and political contexts”, says Katherine.

Master of Urban Design student Shwiti Ravisankar, who took part in the travelling studio, developed a proposal focusing on a riverside industrial site in Delft. Her proposal aimed to transform the site from a mono-functional industrial area to a multifunctional environment which would attract new users and create a sense of community. “I didn’t want to re-design the whole area”, explains Shwiti, “instead, I wanted to strategically insert minimal changes that could then create an impulse for community driven urban areas to grow around it.”

Shwiti relished the opportunity to be part of an international research project, “letting the research do the talking really removed any bias and preconceived notions”, explains Shwiti. The strong research focused approach of the studio helped her quickly grasp the basics to develop a clear foundation for her thesis, “our thesis projects had better direction and no space for confusion or excess of ideas”, says Shwiti.

One of the most exciting aspects of the travelling studio was the opportunity to collaborate with a variety of experts across the development, design and community activism sectors. Whilst students were already well equipped to convey ideas and concepts through written work in an academic environment, the studio highlighted the importance of being able to articulate concepts orally, and in a clear, simple way. Students had the opportunity to build their communication skills in an industry context, and convey their ideas directly to established architects and urban planners. Moreover, students were exposed to a more holistic understanding of the factors and processes which shape both our local Melbourne and Dutch models of urbanism, “as architects and urban designers, often we are more focused on proposing beautiful outcomes rather than understanding the needs of the community. This was one of the first times we really ensured the project was driven by what the residents or users of the different sites need rather than what we think they need.” 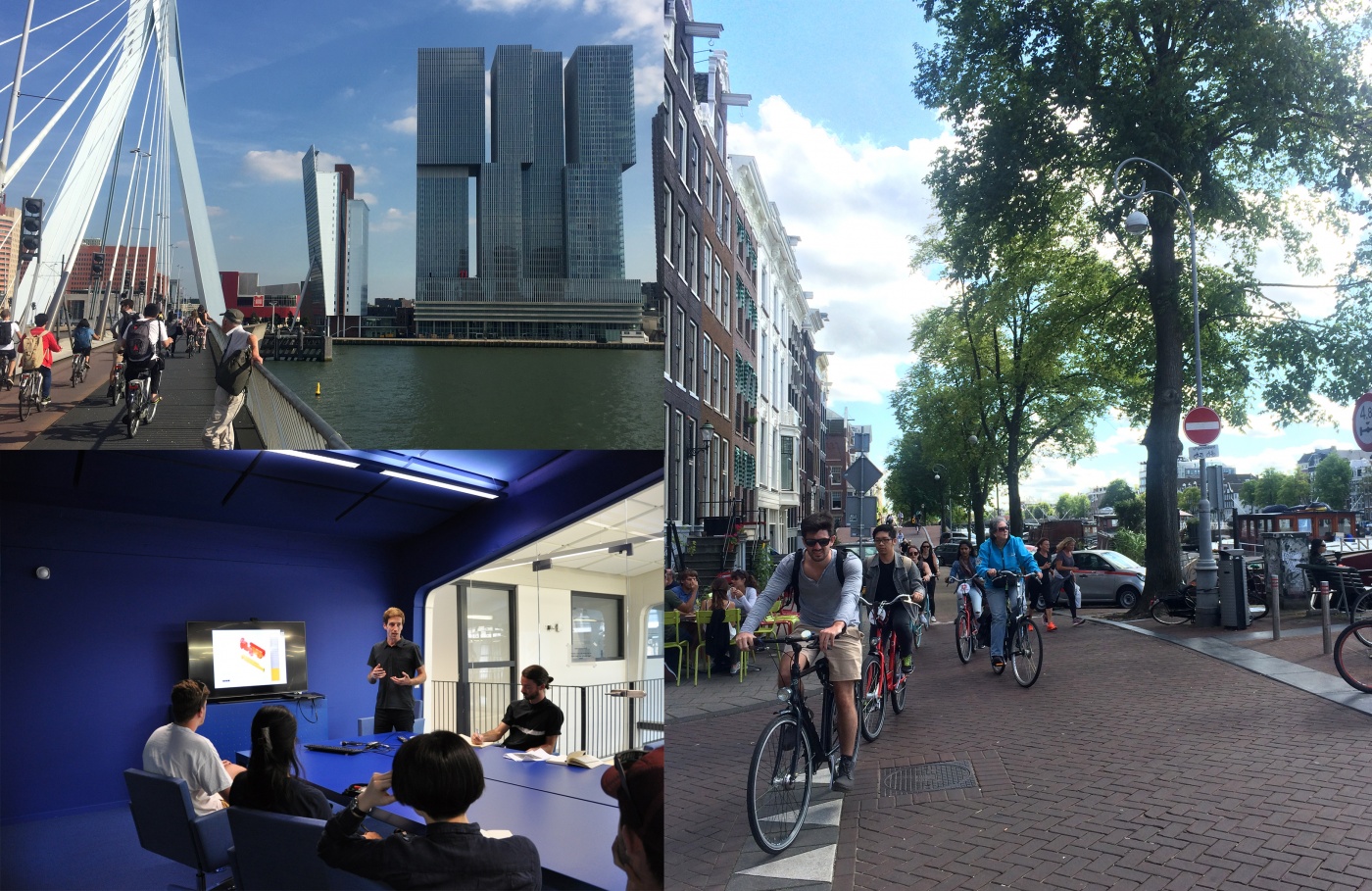 The travelling studio experience proved to be transformative for the way in which the students perceived different cultures of urbanism. The differences in how both Melbourne and Holland utilise space within urban areas, was startling, particular in terms of infrastructure, open space and the density of built up areas. The extensive public transport infrastructure in Holland was notable, and experienced first hand use by the students in their day-to-day explorations. This connectivity enables more sustainable movement patterns, but also had the tendency to create hard boundaries between urban spaces, causing division in cities. Holland’s large scale and regimented approach to urban development stood in stark contrast to Melbourne’s more development-led and, subsequently, organic neighborhoods complete with diverse urban and architectural qualities. Students quickly understood that both design cultures could learn a great deal from one another.

The real world experience intrinsic to the studio was invaluable. Physically experiencing the urban spaces, negotiating with stakeholders and collaborating with industry allowed students to put theory into practice, and gain the skills necessary to fast track the transition from student to professional. Testament to this success is Shwiti’s recent employment with MGS Architects, where she will continue to explore themes from the studio in a professional context.