Studio 19 uses cutting-edge technology to reveal the hidden collections of the museum world.

Studio 19 IMAGING – A Museum Made Digital saw students mastering a range of technologies to open up the world of galleries, libraries, archives and museums (GLAM) to a universal audience. We caught up with studio leader Ben Waters to find out how the studio evolved from concept to real, and what impact it had on The Ian Potter Museum of Art and the students who undertook it. 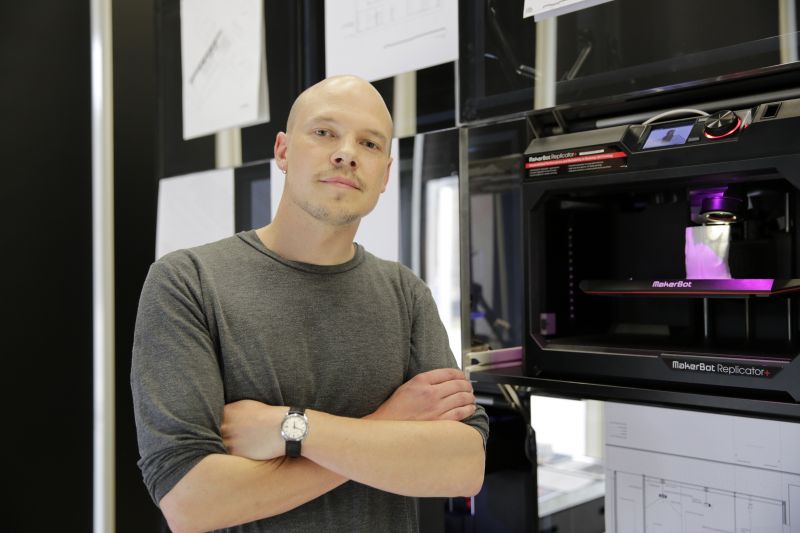 Could you tell us a little about the inspiration for the IMAGING Studio?
I’m fascinated by imaging technology and how the way we look at the world influences our perception of the world. Photography is a really good example of this, as well as more advanced imaging technology like 3D scanning. This is very much a medium and technology-based interest in developing ways in which we can work with new imaging technologies as architects.

The core interest of the studio is to explore the possibilities of virtual space. We use imaging technologies to reproduce environments and objects, and to organise and represent them through virtual and augmented realities. What’s interesting about these processes, is that we begin to question what is real, and what an authentic experience of reality is. The studio aims to develop new virtual spaces for education, interaction and immersion. I think the true value of 3D scanning and virtual reality in architecture and design is still emerging.

What led you to collaborate with The Ian Potter Museum of Art for this studio?
New media and technologies have a real role to play in the field of cultural heritage so that’s what led me to approach The Ian Potter Museum of Art. Most museums do not have enough physical space to exhibit their entire collections. The British Museum, for example, has under 1% of its collection on display at any one time.  New types of technologies like 3D scanning aligned with virtual reality present an opportunity to bring these artefacts out of the cupboards and the drawers and allow the public to interact with them in a new way.

I approached The Ian Potter Museum of Art with this idea of using technology to capture hidden collections in an innovative way. They are really interested in trying to deal with this problem most of their archive being invisible. The idea was that we produce exhibitions of the museum’s archived archaeology and classics collection through virtual technologies.

What is the most valuable piece of knowledge or experience that you wanted students to gain out of the studio?
I wanted the students to develop a way of producing critical approaches to designing space. Being rigorous through critical thinking is a key element to the studio. That comes through an understanding that is aligned with theory, technology and representation.

There is a very strong focus in IMAGING on process, and understanding how process can be a driver of design. Typically, architecture is about translating digital models and information into something real, a building for instance. In the studio we almost reverse that process. We take the real world - buildings, objects and environments - and we produce digital information by 3D scanning, turning them into digital environments.

That in-between space between the real and the digital is where all the studio’s focus is. The students are really learning a lot about what happens to objects and spaces when we translate them in and out of those two states.

Do architects have a role to play in terms of applying this new technology to fields or industries not traditionally associated with architecture?
I started thinking about this following a group discussion at MSD with visiting architect and Treseder Fellow Greg Lynn. The question became what is the role of the architect in contemporary society and how does the architect start to have agency in online and digital civic space? Architects have knowledge and skill in designing spatial experiences, and are well positioned to design virtual experiences for public institutions like museums, galleries and libraries.

Most museums have a ‘virtual museum’ component already. It’s usually a part of the website that displays poor quality photographs of what’s already on show in a type of Google street view experience. What’s exciting about this work is that there is a real opportunity to design new spatial experiences of our cultural heritage and information. Spaces that are exciting, ambitious and complex, rather than just reproductions of what is already existing.

There is a real opportunity for architects to be opening up that space and Having some agency in the representation and organisation of our cultural heritage. 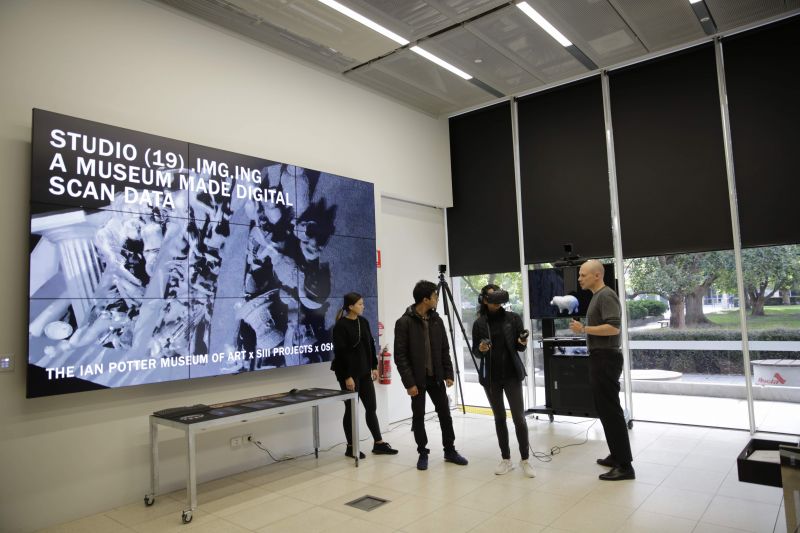 The scans look amazing. Were they complicated for the students to produce?
We scan in two different ways. We scan buildings, environments or spaces using a Lidar infrared laser scanner which is a long-range, larger-scale scanner that picks up environments or buildings really well. It beams infrared laser pulses into the environment.  When the laser pulses hit an object it records a distance and light reading which creates a ‘point cloud’. The videos and animations produced in the studio are mainly done using a point cloud model where there’s millions of points making up the representation.

The other form of scanning is photogrammetry. It uses multiple photographs from different angles complied into one computational process that creates a 3D model. We use

photogrammetry processes when we are scanning the museum’s artefacts for the object scale component of the studio. The photo gets overlaid onto a 3D mesh to create a high-resolution image.

We try to be critical of the process, and recognise errors as part of the investigation process. Usually it’s in the moment of looking at the weird offset realities and distortions that happen when we try to scan the real world that students find design methods or ideas.

Once the students are familiar with the technology, what type of tasks/projects do they move on to in the studio?
The studio structure is based on three ‘capture tasks’. The first task is a photocopying task where students take plans and photos of the museum and move them around on the photocopier to explore this idea of reproduction and replication which is what imaging is fundamentally about. The second task is a photogrammetry model, so we download some models from the British Museum, 3D print them and produce a digital model. For the third task we laser scan the façade of the museum and produce animations from the scans. Throughout the tasks we constantly consider the idea of moving in and out of the real and the physical and coming back into the digital.

After mid semester, we engage with The Ian Potter Museum of Art as well as Arts West, where a lot of their artefacts are archived. Kyla McFarlane, Curator of Academic Programs (Research) from the museum selects the artefacts we will be working with and sets them up for us in Arts Wests’ amazing object-based learning (OBL) laboratories where we can photograph and scan them.

That’s the first time that we engage with the objects themselves.

Throughout the studio, students are also engaged in a design process to create a virtual exhibition space – the ‘virtual room’. Their brief is to display the artefacts digitally, as well as to design a ‘real room’ which is a space in the museum that functions as a mediating space between the real and the virtual room.

What was the final outcome of the studio?
Students produce both individual and group work as part of the studio.  Each group (of four) designs a virtual archive of the objects that we scan as well as produces a virtual reality experience. So, at MSDx (The Faculty’s bi-annual exhibition of student work) IMAGING had four virtual reality experiences on offer where the public could see the artefacts up close in VR and engage with the objects. It’s amazing that we have gotten to the point where you can pick up a 3000-year-old pot in high resolution VR and see every crack and paint pigment. You can interreact with the pots, move them around, throw them up in the air, set it aside and grab another one. That was the ultimate aim for the studio, but along the way the students have done really amazing speculative design work as well that is really interesting.

Studio 19 IMAGING - A Museum Made Digital will be running over Summer 2019. The balloting period to preference this studio closes December 17th 2018.