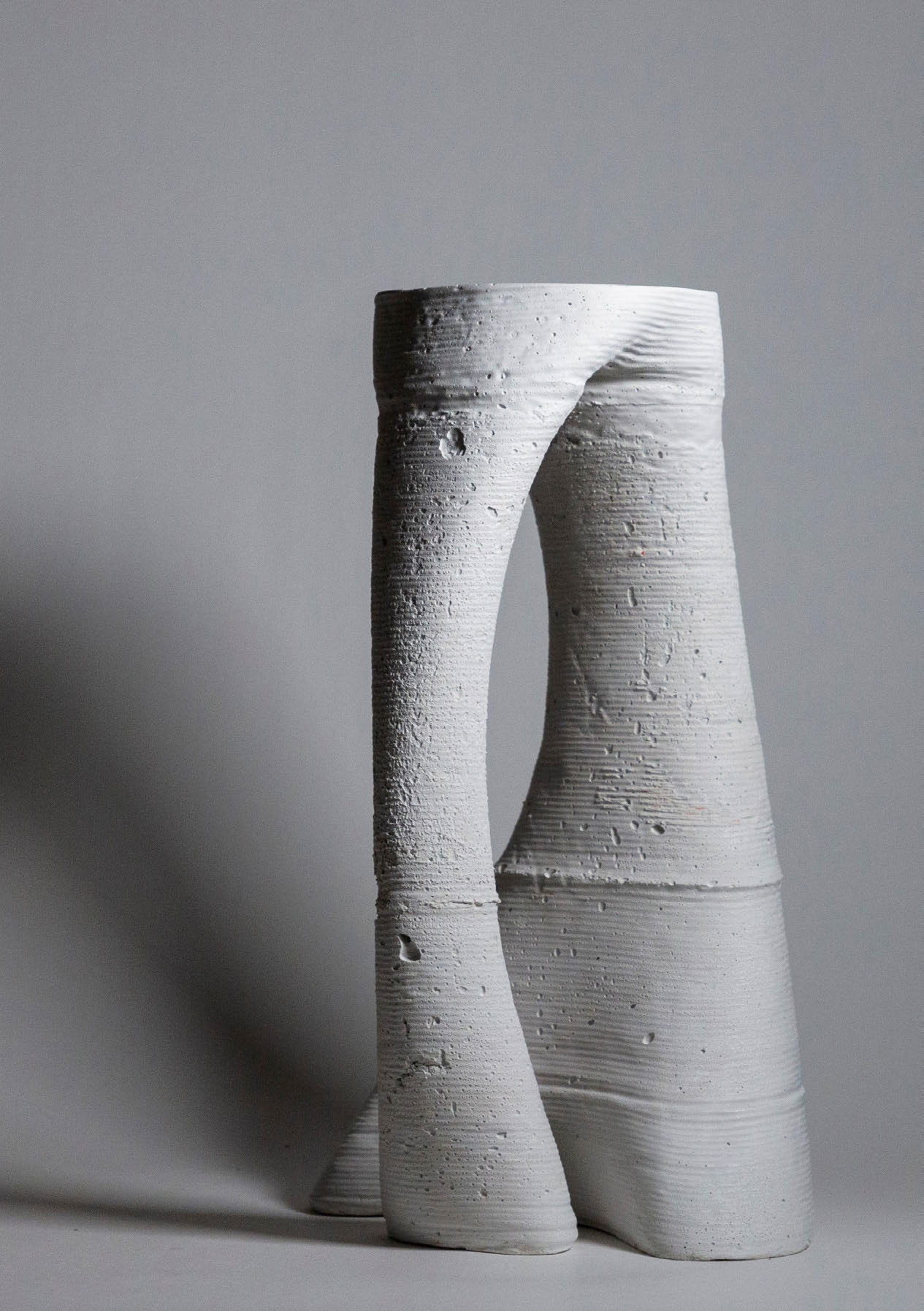 The Cloops project explores the ability of robotic clay extruders to create reusable formwork for the casting of complex sculptural objects.

As a material often modified by the hand, clay acquires new agency through its marriage with 3D printing technology. Objects substantiated using the Cloops prototyping method are distinguished by a geometric complexity hewn by optimisation processes exclusive to the digital canvas. The highly precise hand of the computerised ‘craftsman’ wields form-finding techniques unbounded by the physical boundaries exerted upon traditional sculpting processes, extending the suppleness of clay beyond its understood limits. By introducing virtual geometries into the physical world via 3D printing, their abstract carapaces are tectonically tested: tolerances, layer heights and draft angles represent some of the variables that focalise to produce prototypes anchored in a distinctively layered aesthetic. An additional trait of the transition from numerical to physical is the unplanned moments of failure: the ability for clay to slump, fold and deform under its own weight.

The clay vessels that come as a result of the Cloops process are then able to assume the role of formwork for a variety of casting materials. By applying an impermeable silicon layer between the 3D printed clay moulds and the casting material, the clay formwork is temporarily unable to reabsorb water and hence retains its structural rigidity while allowing the interior substance to remain uncontaminated during the curing period. The magnanimity of clay allows for its continuous reuse: once the ‘positive’ is set, the clay encasement can be rehydrated, removed, then reprinted.

Future avenues for prototyping in this way include the development of clay support structures, the employment of diverse casting materials and the creation of larger-scale objects where the relationship between the stratified formal language of the ‘positive’ object is shifted. A parallel channel of investigation lies in moments of controlled failure - seductive instances of collapse and unforeseen detail occurring within an otherwise regulated language. Such a methodology has the potential to be scaled beyond the currently tested sizes to produce geometries limited only by the scale of the robotic extruders involved.

Cloops represents a newly afforded dexterity in fabricating complex geometries with a material that offers reuse and malleability as its most compelling virtues. The consequences of importing of a traditional material into the digital process present indeterminable opportunities for the synthesis of manual and computerised practices.

Gaby Miegeville-Little_ is a multi-disciplinary designer currently completing a Master of Architecture at the University of Melbourne. Her current avenues of interest concern the humanist implementation of emerging digital technologies – such as robotics and parametric simulation - within the context of architectural fabrication.