Elephant in the Room

A visitor to the museum notices many small things,
Caught up in their own interests and the bias this brings.
What does this allow to go unaddressed?
The “elephant in the room” as you may have already guessed.

There is no bigger problem often ignored,
Then the climate change we all are marching toward.
Familiar with the feeling of being dismissed,
The elephant blows the trumpet declaring a crisis does exist.

She lets out an alarm call to signal the herd,
To stampede into the streets, out from where they were stirred.
She broke out of the American Museum of Natural History,
To protest the human behaviour that has been such a misery.

The African elephant stomps down the street,
She is not detainable and not discreet.
Thick in the air, and all through day
Is a butane, propane and black carbon soiree.

Global climate issues have become more robust,
as diesel, paraffin and petrol combust.
She raises her trunk to sound a deafening drum,
“Enough is enough! Surely you aren’t all just dumb.”

She occupies Wall Street and protests in Times Square,
While sirens serenade and metal flies buzz in the air.
This matriarch elephant and seven more died,
Just so the natural history museum could become more alive.

The Akeley Hall of African Mammals is where they were taken,
Waiting over a century for a time to awaken.
“The Alarm” is the centerpiece where their bodies were staged,
Frozen in a nightmare as if they were caged.

Around the edge of the room, other captive subjects stood by
Within twenty-eight dioramas that were stacked two tiers high
The Rhinoceros, Gorilla, Giraffe, Ostrich, and Lion
Protest the violent acts of the museum in a perpetual die-in.

“Speak softly and carry a big stick; you will go far.”
The elephant never forgets the source of its scar.
A celebrated “conservationist” with a penchant for hunting,
Is the American president the Elephant is set on confronting.

“The Big Stick” is the rifle Theodore Roosevelt carried in hand,
as he stalked the Elephant’s footprints across open land.
His son Kermit joined in on the East Africa expedition,
and shot her small calf taking after the politician.

The Elephant twitches to life in the Africa Hall,
As if no time has passed, she remembers it all.
Her reddish-brown eyes with German glass in their place,
Open to look museumgoers straight in the face.

She finds a book of wisdom that a companion species had written,
It described structures of power and knowledge she just did not fit in.
She learned the “Teddy Bear Patriarchy” is a violent tale,
Of monopoly capitalism, supremacy, and the white human male.

With eyes no longer blind she sees what her own body can make,
the world on her mind that no one can take.
She looks around the room and says “The one thing I know,
It is that the teddy bear patriarchy will have to go!”

The creature denounces the stuffed patriarchy and swallows its monsters
She has had quite enough of environmental imposters
the equestrian statue, the plaque honoring David Koch,
Were devoured using her trunk shortly after she woke.

The mammal’s belly rumbles with resonant demands,
To decolonize, divest, and dismantle as her body expands.
Like a calving iceberg, earthquake, or volcanic eruption,
Her infrasonic call becomes a long-distance disruption.

Her resurrection starts an autopsy fit for the ages,
Where tools are used to dissect the museum in stages.
The Museum of Natural History becomes an architectural taxidermy.
With an agenda to make even the most avid climate deniers squirmy.

Only the museums facade remains standing in place,
To dismantle the damage to the very last trace.
It frames a central garden where the Elephant can finally rest,
With the enormous weight she has lifted right off of her chest.

Within the garden of a damaged planet no collection is held,
Only the demand for climate action where the Elephant rebelled.
A Climate Countdown 2C Clock will keep the time and enforce,
The twelve years that remain for us all to change course.

Each year, one bar of actions counters the change that’s been caused,
The clock ticks, the bars tighten, and it cannot be paused.
Around the Elephant’s graveyard, the margins grow thin
Until the final CO2 alarm sounds, and the endings begin.

So down the street we go with the Elephant inside,
Always remembering her as our climate action trumpeting guide.
And if somehow you happened to miss her,
Just take a step back and look at the bigger picture. 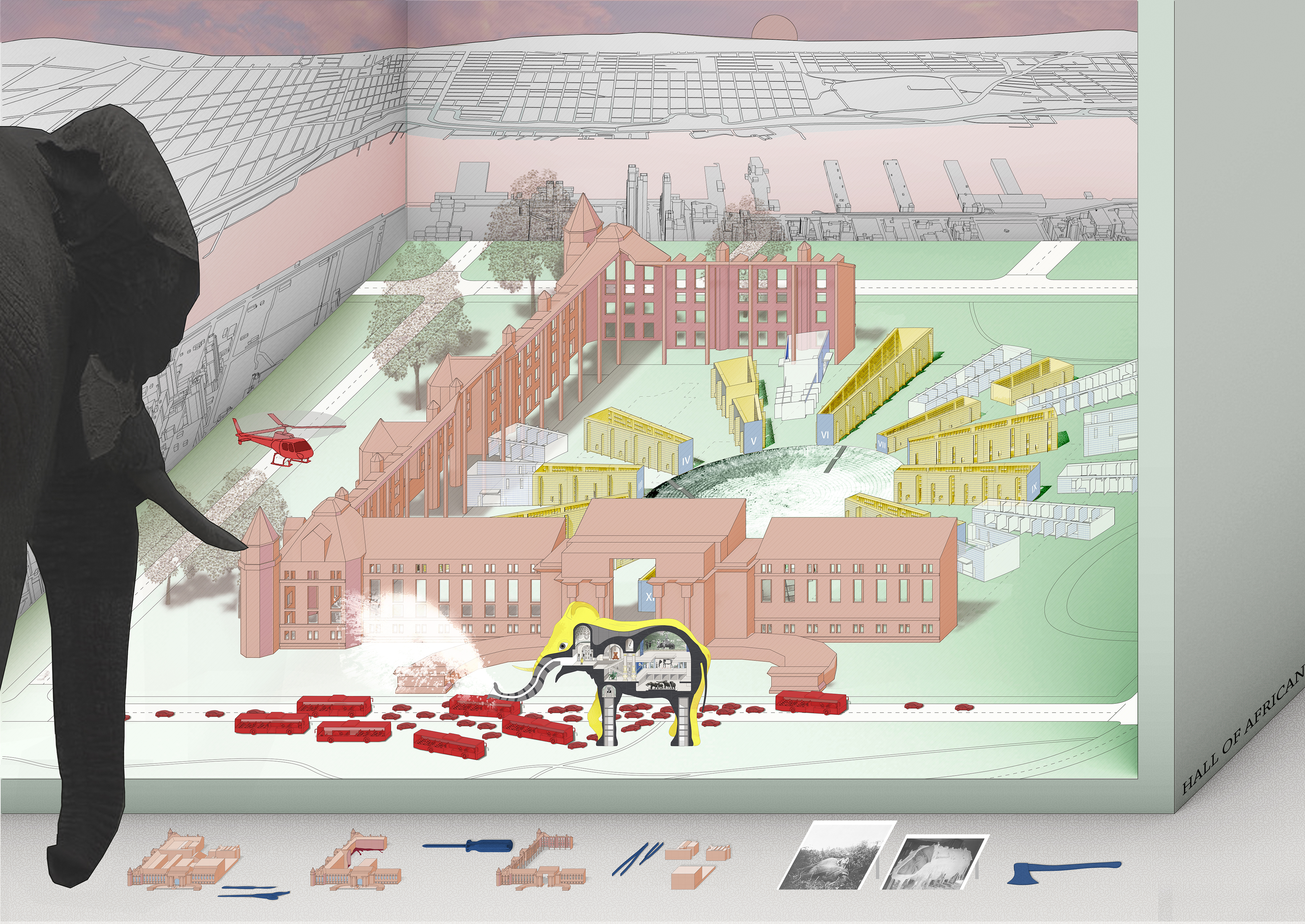 Back to The Climate Imaginary