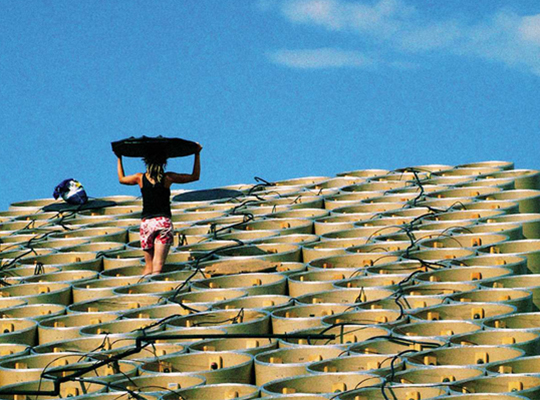 Students will initially work in teams to establish a body of research and shared resources on the site in the suburb of Fitzroy, Melbourne. The research will focus on a range of topics - socio-cultural, historical, morphological, regulatory, economic, environmental, etc - and form the base for subsequent design speculations.

A second stage will require students to work in pairs to research and design a series of typologies for food production with a focus on an initial understanding of the systems required and a subsequent speculation on its scaling up, verticalization, programmatic expansion and engagement with the city.

The first half of the term is aimed at building up research into typology as well as a set of design techniques in order to formulate a clear understanding about the site, the system and the conceptual framework of the studio.

During the second half, students will develop their projects focusing on the consolidation of their ideas as well as the careful drawing and modelling of these speculations. Rigorous and bold experiments will be rewarded.

The ambition of the studio is to design a series of provocative projects exploring the idea of food ecology and to visualise the consequences of this in both our individual experience of urban and architectural space as well as the environmental impact of these in the datascape of the suburb.

As an individual I have always been interested in cities and how urban infrastructure, form or fabric can inform a certain design process. I believe architecture isn't formed in a vacuum and cities constitute an endless and rich field for research and design experimentation. These ideas have been pursued at different scales through my practices, MartiresDoyle (together with John Doyle) and COMMON (with John Doyle, Edmund Carter and Ben Milbourne). In both of these practices each project is seen as a unique opportunity to create spatial complexity from seemingly abstract notions of urbanity, cohabitation or socio-economical factors. The goal as a practitioner is always to create unique, complex and beautiful spaces that work as a connective platform between the context they're inserted in and their occupants.